Loncat ke konten
Beranda History Helicopters at War
From World War II, helicopters were largely insignificant in usage. While they were often used for supply and rescue missions in the China-Burma-India Theater, their limited design restricted their usage for greater depth. This continued in the Korean War, as helicopters were kept away from combat missions. Greater deployment for troop ferrying was disallowed by law, but on November 4, 1952, via an agreement signed by the Army and Air Force, the helicopter began its evolution in increasing roles played in combat zones. Significantly, before the Korean War ended, the 6th Transportation Company with Sikorski H-19s was deployed via helicopter to Korea.
The Vietnam War saw the United States greatly increase the usage of air mobility in their war strategies. Troops from the Army of the Republic of Viet Nam (ARVN) were sent to fight Viet Cong guerillas in 1962 using helicopters. This enjoyed initial success, before the guerillas found ways to combat this during the crucial AP BAC stand. They were taught how to shoot down the H-21 and Huey helicopters, and the air threat was greatly reduced as a result. 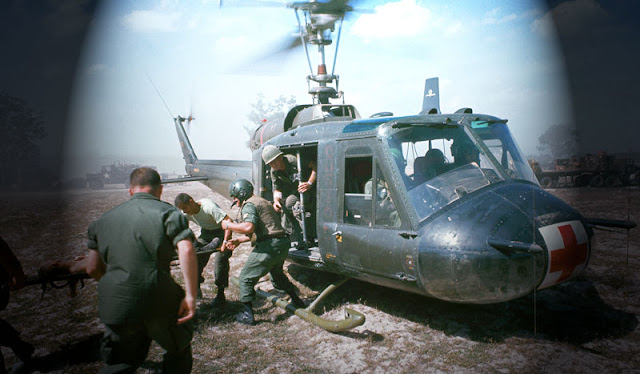 In spite of this, the U.S. Army broadened their scope of ground attacks via airborne vessels (in the shape of helicopters). With their increasing involvement in the Vietnam War by the mid-1960’s, the Army’s helicopters now not only ferried huge troop forces, but also larger fleets combined with bomb and rocket carpeting of opposing armies by fixed-wing airplanes.
Using the helicopter, the U.S. Army could engineer rapid deployment and withdrawal of troops into, and from, enemy territory, which was a far cry from slow engagement over ground forces. It could also launch surprise attacks on enemies with less reaction time. The Ch-47 Chinook and UH-1 Huey were widely used for such purposes with great success.
Armed helicopters evolved as well, providing cover and support for ground troops against enemy troops. Helicopter gunships such as the AH-1 Cobra featured wide-ranging artillery including grenade launchers and guided missiles. Before long, the helicopter as a weapon of war was as much a fixture as the tank, armored personnel carrier and jeep. The Vietnam War had its greatest representative weapon in the Huey.
The number of air casualties was massive during the Vietnam War. There were a total of 4,869 American helicopters lost in the war zone over the course of 1962 to 1973. Curiously, forty-seven percent of the losses came from operational mishaps, which resulted from poorly maintained war-time helicopters. The thick Vietnam jungle landscape also proved an obstacle to damaged helicopters, leading to multiple crashes.
By achieving reasonable success in the usage of helicopters in war conflict, other countries like Great Britain and the ex Soviet Union copied the U.S.’s lead. However, most countries limited it to troop deployment over combat zones against rebel groups, primarily using U.S. helicopters.
With the end of the Vietnam War, the U.S. Army continued to refine its combat aviation capabilities as they became less reliant on the U.S. Air Force. The looming threat in Europe of a Soviet ground offensive became their focus, and once again, the helicopter was the primary weapon.
The HueyCobra with heavy artillery was used against deep enemy targets. Utilizing greater American technology that facilitated attacks under night cover, such as “Nap of the Earth” (NOE) flying where helicopters could fly hidden amidst trees and hills and infrared and night imaging gadgets, the Army obtained an advantage over the larger numerical Soviet ground forces and bombarded them with missiles. Helicopters equipped with sophisticated laser-guided missiles to cripple tanks became a fixture in the 1980s.
The benefits of these strategic developments were shown in all their glories in the Persian Gulf War. Iraqi ground troops and artillery were crushed through tactical maneuvers that hinged on the mobility provided by U.S. attack helicopters. These results encouraged other countries to do the same.
Helicopters have not contributed much beyond infantry warfare, due to comparative disadvantages in speed, protection and weight management capability to conventional fixed-wing aircrafts.
From its infancy, helicopters with greatly developed navigation capabilities have been a mainstay in Combat Search and Rescue (CSAR) missions. Notable results were achieved during the East European wars such as the Bosnia crisis and the Yugoslavia bombing in 1999, while Vietnam offered more than its share of highlight reels.
The helicopter has also proved to be the perfect tool in submarine hunting and anti-shipping missions, over-the-horizon targeting and deep sea mine clearing. They provide a more mobile solution compared to ships and cannot be targeted by enemy submarines. Helicopters can also escape detection by ships’ sensors as they are sited beyond the horizon, providing ally ships with target data. They are also safe alternatives to deep sea mine clearing by keeping a distance above water.
Despite increasing military usage, the helicopter still lacks in speed, range and lifting capabilities. However, with continued research and development by aircraft manufacturers worldwide to meld its attributes with the finer points of conventional aircraft, the helicopter could see an even wider future role and greater impact in the field.

Read also: History of Aircraft Circa 1930