Loncat ke konten
Beranda Olah Raga The Historical Record of Bob Pettit
The NBAs blossoming in the late 1950s and early 1960s is heralded as a revolution in basketball. Oscar Robertson made point guards big, stocky, and brutal. Bill Russell turned defensive play into a beautiful art form. Wilt Chamberlain was a complex revolution all unto himself.
One of the more subversive players of the era happened to be a white man born in 1930s Louisiana named Robert E. Lee Pettit, Jr. With an aww shucks humility, slow Southern drawl, and scrawny chalky white body, Bob Pettit doesnt seem the man to have indeed begun an insurgency in an era of civil rights agitators and beatniks.
Pettits revolution was borne out of necessity. As a center in college at Louisiana State University, Pettits 200 lbs, 69 frame wasnt much of a problem, but in the pros, no one was going to be using a center that thin and weak. And although Pettit switched to power forward and was named the NBAs Rookie of the Year in 1955, he took a hell of a beating in the process. He vowed that from now on, hed be the man dispensing abuse, and not the one taking it.
Despite popular, conservative thinking that weight-lifting ruined a basketball players shot, Pettit nonetheless underwent a rigorous weight training program and greatly improved his strength, especially the power of his hands. The effects were immediate as the 240-lbs Pettit took home the NBAs scoring title in 1956 and was named MVP.
His powerful hands now allowed him to better maintain position on the boards where he made his living. He was masterful at gobbling up offensive rebounds for putbacks or, after getting fouled, free throws. Lakers forward Rudy LaRusso best described just how difficult it was to handle Pettit:
If he got the ball inside the foul line, he owned you. He was so tall, he could shoot the ball over you. He also had one-dribble moves to either side. And he was protected by the refs. It was horrible. Bailey Howell told me that he was at the game where Pettit made a free throw and the announcer said, Thats Pettits 15,000th career point. Bailey said, yeah and 12,000 of them came at the foul line.
Pettits rebounding, scoring, and determination helped lead the St. Louis Hawks to four NBA Finals, all against the Boston Celtics. Only once did the Hawks defeat Boston in these close and contentious affairs. And the one series they did win came on the heels of a bulldozing offensive spectacle by Pettit. In Game 6 of the 1958 Finals, Bob scored 50 points including 19 of the Hawks final 21 points to end the game and capture the title.
Most remarkable about Pettit, though, was his combination of speed, skill, determination, and athleticism for a power forward. All of that added up to remarkable durability. He made the All-Star team every year of his career. He made the All-NBA 1st Team every year of his career, except his final season when he only made the 2nd Team. And impressively he averaged 25 points and 16 rebounds over the first half of his career. Over the last half of his illustrious career, Pettit averaged 28 points and 16.5 rebounds.
The man was before his time, of his time, and instigated new time all while being incredible all the time. 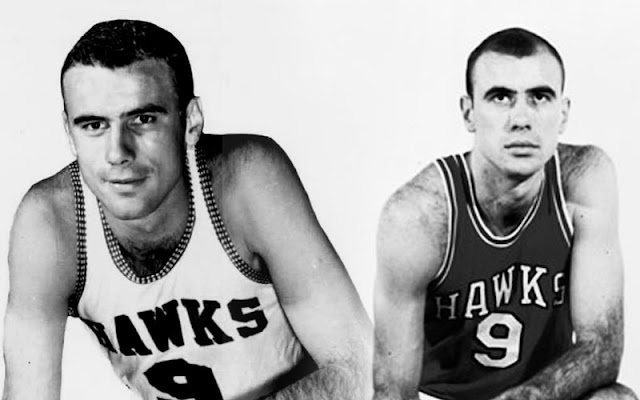