Loncat ke konten
Beranda Olah Raga The Historical Record of Bernard King
Of the great scoring forwards in the 1980s, none began with as much promise as Bernard King. That promising beginning quickly gave way to hardship then a road back to redemption. A wash-rinse-repeat cycle occurred in the middle of Kings career where glory again gave way to pain, but he once again resurrected himself.
The Promise
Bernard started his NBA career with the New Jersey Nets and did so in incredible, spectacular fashion. His 24.2 points per game as a rookie is tied for 3rd-most by a 1st-year player since the NBA-ABA merger in 1976. He also cleaned the glass every night with an average of 9.5 rebounds per game. The Nets were a pretty awful team, though, and his efforts were mostly for naught. A follow up campaign of 22 points and 8 rebounds a game lifted the Nets to a 37-45 record, which proved just good enough for the playoffs. King was the hub of the Nets attack but they were handily discarded by the Philadelphia 76ers. It would be another four years before Bernard again appeared in the postseason.
The Fall
King was traded by the Nets to the Utah Jazz following the 1979 season. His stay in Utah was brief and brutal. Alcohol problems, which had occurred in college, resurfaced for King and off the court legal troubles stemming from accusations of sexual assault derailed his season. From the 10 charges, King copped a plea deal for one count of misdemeanor sexual assault, King was rightfully suspended by the Jazz and appeared in only 19 games in the 1979-80 season. Over the years King would intermittently face yet more accusations of abusing women.
The more famous and chronicled fall of Bernard King came in 1985 when he blew out his ACL. It would take King nearly two years of rehabilitation to return to the NBA. And from that return to the court in 1987 it would take several more seasons for him to return fully to his peak form.
The Resurrection
Kings first resurrection came in a trade to the Golden State Warriors following the 1979-80 season. For the 1980-81 Warriors, King shot a career-high 59% from the field on his way to averaging 21 points a night, a great improvement on his 9 PPG for the Jazz. In 1982, King was named an All-Star for the first time in his career and would also be named to the All-NBA 2nd Team.
For the 1982-83 season, King found himself traded to his hometown New York Knicks. That season was a good one for King, but his greatest basketball triumphs lay just around the corner.
The 1983-84 Knicks were an average team that possessed a whirlwind force in King. He averaged a new career-high of 27 points per game and finished second in MVP voting behind Larry Bird. In the postseason, King engaged in a legendary evisceration of opposing defenses. Against the Detroit Pistons in the 1st Round, King averaged 42.6 points per game while shooting 60% from the field. Against the Boston Celtics in round 2, Bernard simmered down to just 29 points a game on 54.5% shooting. The caged King still pushed Boston to the brink as the Celtics needed seven games to dismiss the upstart Knicks.
Unbelievably, Kings 1984 postseason form continued unabated during the 1984-85 regular season. BK averaged 33 points a night and was named to his second-straight All-NBA 1st Team. In back-to-back-to-back games against Cleveland, Detroit, and Indiana, King scored 40 then 45 and then 52 points. He dropped 60 points on 30 shots against the Nets on Christmas Day. In March against Kansas City, King was again decimating the opposition with 37 points on 16-26 shooting, but that was the game he blew out his ACL

After the Knicks amazingly showed no interest in King following his return to good health, he signed with the Washington Bullets in October 1987. His scoring average slowly ticked up over the seasons from 17 to 21 to 22 PPG by 1990. King gave his final hurrah in the 1990-91 season. His startling scoring efficiency from the field had dissipated. Instead of routine mid-.500 FG%, King had to settle for just 47% shooting. His free throw shooting, though, had by now reached 80% and his assists per game was at a career-high 4.6. The 34-year olds points average reached a ridiculous 28.4 by the end of the season.
With his second resurrection complete, King again crumpled with a knee injury and missed all of the 1991-92 season. In 1993 he returned to where his NBA journey began, New Jersey. He gave the Nets 32 games as reserve forward after the All-Star break and then left the NBA for good. His rollercoaster ride of rising and falling was at last over. 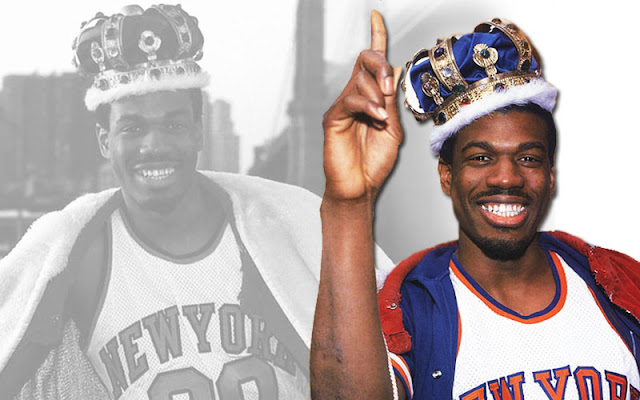