Loncat ke konten
Beranda Biography Martin Luther King JR short Biography
Martin Luther King JR short Biography – Speech of Martin: “I have a dream. People who have dreams that will spend her whole life chasing dreams and submit his life for such dreams. My four children are still small, will one day live in a nation where they are not assessed from the color of their skin, but the content of their character. “
(Martin Luther King, Jr.)
Martin Luther King, Jr. was born in Atlanta, Georgia, the United States on 1929. His father and his mother’s grandfather was a Baptist with a background of civil rights activists. While his great-grandfather was the son of Martin Luther King, SR. and Alberta Williams King. He was the second of three brothers. He has an older sister named Willie Christine and a younger brother named Alfred Daniel Williams King.
Luther became a very private family tied to the bottom line. At a time when his grandfather died, because of a deep sense of sad, he jumped from the window of the second floor of his house onto the page. Lucky he does not suffer any serious injuries.
He was great as a figure of the educated and religious. His father was a pastor in Atlanta, so it’s no wonder if he taught Catholic religion to his children with great discipline.

Martin Luther King JR short Biography – When still children Martin suffered violence and racial discriminate. The story of the racial discrimination to which he naturally starts from his departure to school, when he shared his teacher in a bus. He and his school teacher asked to give place to a white passenger. When they don’t want to relocate, the bus driver thus cursed by saying, “Blasted blacks.” Luther still not flinch, but his teacher asked him to abide by the rules. Eventually, they have to stand for 90 minutes on his way to Atlanta.
Martin Luther King was raised in a religious environment. The religious life of his family made him capable of critical thinking with the surrounding environment. He has thought of skeptical about the doctrine of Christianity. Luther stated doubts began to appear tireless of course, though he finally has a conclusion that the Gospel has a lot of truth and the benefit that cannot be denied. In a State of confusion that he went to the seminary.

Martin Luther’s journey in the world of education

Martin was educated at a public school where segregation is still very strong in Georgia. He was educated at the Booker t. Washington High School. His maturity and intelligence make him get an accelerated education. At the age of 15, he entered the Atlanta’s Morehouse College. He graduated from the school as a young scholar in the fields of the arts.
After graduating from Atlanta’s Morehouse College, he entered the Crozer Theological Seminary in Pennsylvania. In its activities in the Theological Seminary, he was in contact with the thought of Mahatma Gandhi. He studied the philosophy of nonviolent resistance property of Gandhi. He found the open method that is immoral and impractical to squeeze people for the sake of freedom. From religious schools, he graduated with a Bachelor of Theology in 1951.
Two years later, on June 18, 1953, he married Coretta Scott. A simple wedding is performed at the home of the bride in Heiberger, Alabama. From the marriage, he had a son who had each given name: Yolanda King, Martin Luther III, Dexter Scott King, and Bernice King.
In 1954, when he was 25 years of Martin Luther King, Jr. became pastor at the Dexter Avenue Baptist Church, Montgomery, Alabama in numbers. He then proceeded to the doctoral level, continued his studies in systematic theology at Boston University. He graduated from Boston University in 1955 with a doctoral degree in philosophy.
On December 1, 1955, took place an event of racial discrimination received by a woman named Black Rose Parks. Parks suffered racial discrimination because it refused to give his seat on the bus to a white person.
This incident sparked demonstrations and boycott. Black activists of the Association of the development Montgomery chose Martin Luther King, Jr. as their leader.
The boycott ran for 382 days until Montgomery bus segregation-free after the Court declared the United States is not the enactment of legal segregation in Alabama. During the boycott, Martin was arrested, and his house was bombed. After the bombing of his home, Luther asks his followers to conduct nonviolent protest and soothe them.
In 1957, King, Jr. set the holding of the Southern Christian Leadership Conference to facilitate the movement of Montgomery. He was elected as its leader. Served as leader of the Luther traveled to several areas, including his birthplace to start a civil action. In the course of it, he gets the inspiration of Gandhi’s struggle about nonviolent resistance as a form and media independence.
Martin Luther jailed
The 1960s Luther King, Jr. was jailed for committing the action of sitting in Greensboro, North Carolina. But it turns out that no prison could make it wary. He went back to do a similar action in the restaurants in Atlanta. In such cases, he was jailed along with 33 young people due to protest segregation.
Luther at the State Prison at Reidsville Farm for four months. He was later released after the intervention of John Kennedy and Robert Kennedy. However, again Martin was jailed in December 1961 because rallied in Albania, Georgia. Unfortunately, the waves of protest in Albania was wound up. He was also a lot of criticism due to allegedly obtaining as a cause of failure of the protests.
Martin Luther King, Jr. then began planning a massive protest in Birmingham, Alabama that is said to be the most segregated in the United States. He started his movement with touring the city to campaign nonviolent resistance. He recruited two hundred people who willingly went to jail due to such action.
At the beginning of April 1963, he arrived at Birmingham and protested action began over the past month. The protests make one Afro-Americans arrested each day because of the refuse segregation. However, citizens continue to launch protests. This event was forcing the police committing abusive. The police bring the dog and do the shots to disperse demonstrators 2,500. In the action of about 3,300 Afro-Americans are incarcerated. 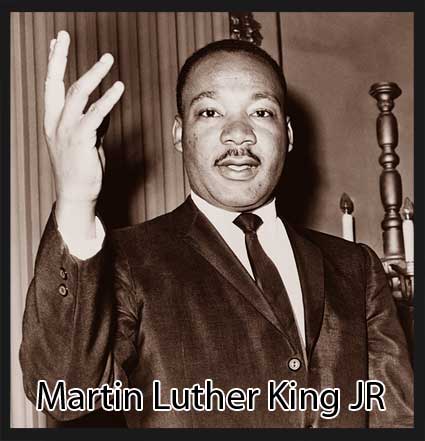 Letters Of Martin Luther
In action, Martin Luther King, Jr. along with Ralph Abernathy was arrested for demonstrating without a permit. During the eleven days languishing in prison, Martin wrote a famous letter from Birmingham jail behind titled “The Letter from Birmingham Jail.”
This letter is a form of response from the eight Alabama clergymen critiquing the movement of Birmingham, in his letter of Martin Luther King, Jr. wrote:
“One day, the South will recognize their true hero, they will be the James Meredith with a lofty goal that will be able to overcome the ridicule as well as the future hostile crowd with a sad loneliness like a pioneer.”
Protest movements in Washington became an important marker of the history of the struggle for civil rights. This is because such action affects the birth Act of the civil rights of 1964 and the voting rights act of 1965.
Martin Luther King JR short Biography – Throughout his life, Martin Luther King, Jr. has been a lot of fighting for humanity. He fought against the law without violence. He was particularly inspired by Gandhi’s movement in India. He has been out going to jail. Torment and suffering have gone through a lot. However, it’s all but not the spirit of MLK (Martin Luther King) to continue to fight until his death. Luther died on April 4, 1968.