The flag of Aruba uses the base color is gray or Navy Blue, a third of the bottom two horizontal yellow line, and is located at the top right of a four star picture red white striped out. So, the flag of Aruba using only four colors are dominated by the blue of the sea. 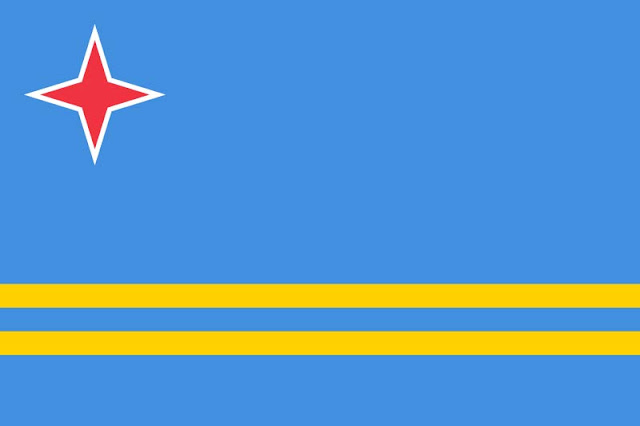 Aruba at a glance

Aruba is not a country, but it is an island of the Lesser Antilles which length is approximately 33 kilometers in the southern part of the Caribbean Sea, and 27 kilometres north of the coast of Venezuela.

Aruba, has no administrative divisions, but is one of the four constituent countries that make up the Kingdom of Netherlands. along with the Netherlands, Curaçao and Sint Maarten,. So, the citizens of Aruba holds Netherlands passport.

About the natural state of Aruba, the island’s climate is dry and mostly a lot of plants, Cactus. But, though dry, thus this place into a tourist attraction, because by going to Arumba tourists can enjoy the warm air. An area of Aruba roughly 193 square kilometres, with a population of about 103,000.

Some things to know:

For those of you who are looking for a picture of the flag of Aruba, we attach as below, please take it to your interests.

So we can tell them about the flag of Aruba, may be useful.