Loncat ke konten
Beranda History The Norman Conguest
The Norman Conguest. When Edward the Confessor died in 1066, William, Duke of Normandy, asserted that he had been promised the throne of England. He also said that Harold, who had visitor Normandy in 1058, had pledged himself to support this claim.
Harold did nothing of the kind. Forgetting whatever promises he may have made, he helped himself to the throne. From that moment, a Norman invasion became extremely likely, and Harold knew it. 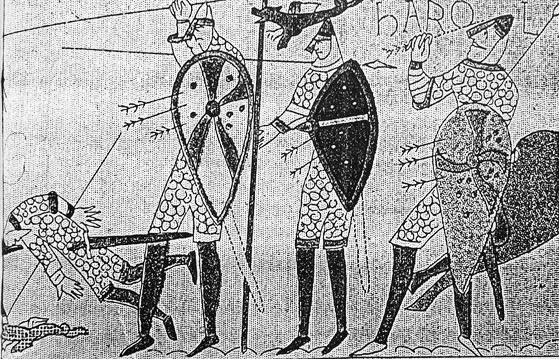 The two men at the heart of this drama were very different. William was the illegitimate son of Robert, Duke of Normandy, known as Robert the Devil’. Aged thirty-eight, he was six years younger than Harold; a tallish man with thinning black hair and twirling moustaches. His attitude to warfare was original by the standards of those days. Instead of relying on brute force, he introduced carefully thought out tactics.

He used his archers rather like artillery; to soften up the defences and cut holes in the enemy ranks before launching an assault. As for his horse soldiers, he employed them in much the manner of present day tanks.
King Harold was forty-four when he took over the throne. He was a thick-set, stocky individual with great stamina and courage. Athough he thought himself a cunning fighter – a general who might spring a few surprises on his enemy-his ability was not really to be compared with William’s.
Throughout the summer of 1066, Harold watched and waited for william’s invasion fleet. He occupied a headquarters on the Isle of Wight his ships patrolled the Channel. But the Normans did not come. By the end of August, the sailors were running short of food, and the vessels were in a sorry state. Harold ordered them to London to be refitted.
In Normandy, William must have smiled with satisfaction, The way across the sea was now clear. With his warships in dock, there was nothing Harold could do to harass the invasion fleet.
Had he known about it, he wpuld have been even more pleased. This vengeful Norman duke was not the only Continental ruler with his eye on England. Harald Hardrada, King of Norway, had similar ideas. In late August, much to Harolds dismay, he suddenly launched his own invasion by landing an army at tyhe mouth of the Humber.
Harold hurried north to meet him. On 20 September, he defeated the Norwegian forces at the Battle of Stamford Bridge. Harald Hardrada was killed in action.
Two days later, William’s men landed at Pevensey in Sussex without any opposition. They spent the next few days ravaging the country-side-killing, burning, and looting-while, fresh from one battle, Harold and his soldiers marched south to fight another.
By early morning on 14 October, the two sides were in position for what was to become known as the Battle of Hastings. Harold’s troops had occupied the crest of a hill at the edge of the forest – seven miles from the Norman landing place. There were about eleven thousand of them, armed with clubs, axes and short iron swords.
The Norman army, which was now on the far side of a valley, amounted to eight thousand. But, these men were more professional than Harold’s. Nor were they wearly after two forced marches with a battle against the Norwegians in between.
At ten o’clock that morning. William nodded to a trumpeter, who sounded the advance. The English were massed in eight ranks protected by a wall of shields. Whatever victory might be in store for the Normans was obviously going to be hard won.
The Norman infantry moved forward while, over their heads, the archers’ arrows covered their advance. Immediately gaps began to appear in Harold’s ranks. Then, suddenly, the barrage from the bowmen creased. The infantry moved in and the real carnage began.
Harold’s soldiers may have been tired after the events of the past week or so, but accounts of the Normans’ behaviour in Sussex had made them anggry. The fought with desperate ferocity and courage. Nevertheless, William’s foot soldiers managed to hack holes in the English ranks – holes that made it possible for the cavalry to charge through, wheel round and attack from the rear.
But the battle was far from over. Quite early, the troops on the Norman left flank wavered. Then, with heavy casualties, they retreated towards the safety of the valley. Some of Harold’s men immediately broke ranks and pursued them. It was a fatal mistake.
Cut off from the rest of the English army, it was an easy job for William’s horsemen to gallop up and cut them to pieces. And it gave William and idea, which he used later in the day.
Things were still fairly evenly matched. To improve his situation, William ordered his right flank to advance – and then pretend to retreat. The English, forgetful of the previous disaster, swallowed the bait. Once they were in the open, the cavarly slaughtered them.
Harold’s army had now lost both its flanks. The survivors were clustered around the command post. In spite of heavy losses, they were fighting as furiously as ever.
William now had another inspiration. He ordered his archers to aim their shots higher. This meant that the arrows would inflict casualties on the rear ranks. It worked with horrible efficiency.
The end came at about five o’clock. Tewenty Norman knights charged the English position, trying desperately to force their way through it. Only four survived, but that was sufficient. They found King Harold and killed him with their swords. (Harold was not slain by an arrow in one of his eyes. The story, though popular, has no truth in it).
With their leader dead, the fight went out of the English. Those who could manage it, quietly withdrew into the deep forest leaving behind their wounded. The battle was over. The reign of William the Conqueror hade begin.

Read the next article : A Plan for Britain