Loncat ke konten
Beranda History History of Ornithopters and Helicopters
One of the first designed or at least imagined flying machines was the ornithopter. In essence, when mankind gazed at the skies, he saw that the birds were flying and thus mankind realized if he wanted to have the domain of the skies, he would have to fly like a bird. Thus since the dawn of the civilization, mankind with, its quest for dominion over nature, has tried to repeat the design and the behavior of the natural flying species.  Besides the mankind’s formal history, the legends go back far describing the mankind’s quest for flying.
The first reference to an ornithopter and a real reference to flying is in the legend of Daedalus and Icarus. When Icarus was held captive by the Gods on top of a mountain fortress, he used big wings tethered to his body by wax. However because he flew too close to the sun, according to the legend his wings melted away from his body and he plunged into the deep abyss of death.  Although it is a tragic myth, it symbolizes the quest for the man’s attempt to fly and thus control the forces of nature. 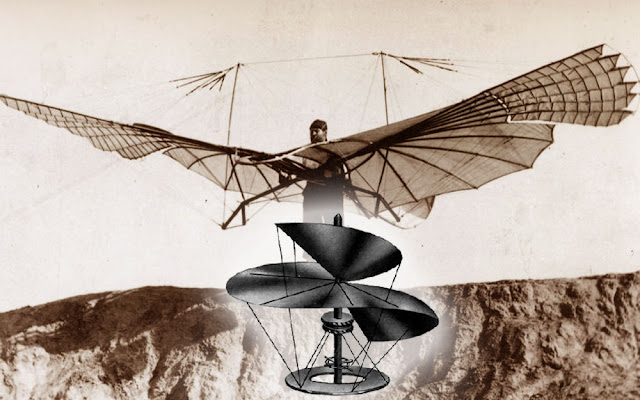 As mankind advanced further and further, throughout history there were lots of trials and designs for flying machines. In order to establish flying, mankind looked at the only available example of flying: namely the birds. Thus, everyone was trying to copy the designs of the birds to design a flying machine that paralleled their development: The Ornithopter.
In essence, an ornithopter was a machine that had birdlike wings and a place for the operator to be attached.  The operator would flap his arms and the wings of the ornithopter would be flapped also.  In essence, mankind would fly by simulating the flapping of the bird’s wings. However, since the principles of aerodynamics was not discovered, no one was aware of the ratio of the wing to muscle power and thus all of these projects and attempts were doomed to fail.
Perhaps the most serious thoughts came from the famous thinker and designer Leonardo Da Vinci.  He drew many representations of the birds to correctly understand the principle.  Thus, as a result he designed may ornithopters design and a helicopter design which was a vehicle that can take off vertically from a ground y the use of blades that are horizontal to the ground.  In fact, it can be said that an ornithopter is the father of helicopters.
During the history of mankind there were hundreds of ornithopter and even helicopter designs which never had a chance of flying off the ground.  Especially the 19th century was filled with many inventors competing for the design of the successful ornithopter. In fact even the great inventor Thomas Edison tinkered with an ornithopter ad even received a patent.(although the design was not feasible and thus it never got ff the ground)  When it was realized that the power to flap the wings was just not enough in humans, new designs were introduced that utilized mechanical energy for flying.   In 1870, the French inventor Gustave Trouve designed an ornithopter that received its power to flap wings from an internal combustion engine.  The flight was a partial success as the ornithopter that he designed flew 70 meters off the ground.
The final result was that although people tried to fly ornithopters, it just wasn’t a viable aerodynamic design.  Although in the 20th century some successful ornithopters were built, it was discontinued as an idea.  Then the power to flight was concentrated on glided flight (not flapped wings flight) and thus the Wright Brothers were able to fly creating a huge industry in the 20th century.  However, the efforts for the Ornithopter were not in vain, as it was in principle the founding stone of the helicopter.