Loncat ke konten
Beranda History 1903 - The Initial Engine Powered Flight
Orville and Wilbur Wright, by June 1903, have completed the design and construction of their power machine. The Flyer’s wingspan was just over 40 feet, over an area of 510 square feet and weighed 625 pounds. The brothers built as much as they could in Dayton, Ohio, and then shipped the rest to Kitty Hawk, NC for the final assembly.
The brothers departed for Kitty Hawk, NC on Sept. 23rd and arrived at Kill Devil Hill, 2 days later. While they were waiting for the shipment, they repaired the hangar and construct a new shop. After the shipment was delivered, the Wrights took 3 weeks to construct the Flyer. Everything they did, they practiced gliding using the 1902 glider, gliding longer hours and increasing the control the glider. 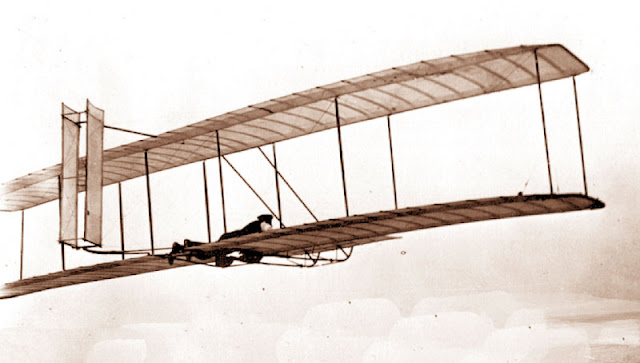 Weather that day was cold and stormy-horrible. They had been working on assembly and had the Flyer completed early in November. November 5, the brothers tested the engine. The result was not pleasing. The motor almost did not work as had been expected. Its excess vibration damaged shafts, which was shipped to Dayton for repairs.
They tested the motor again on November 28. Again they had issues with a crack in the propeller shaft. Orville returned to Dayton, to construct new shafts of spring steel firm.
On December 12 the Flyer is ready for the flight, but the wind was too light for takeoff. They did not want a flight on Sunday; because they told their father they would never fly on the Sundays. Their first attempt at powered flight would be on Monday, Dec. 14.
They threw a coin to choose who would be the pilot. Wilbur won and climbed onto the Flyer. After a difficult start, it began to scoot down the rails, and then began to rise from its path. Wilbur misjudged and turned up too early, without realizing the efficiency of the rise. The Flyer rose slightly, stalled, and then came to rest near the foothills. The machine had slight damage. Nevertheless, the Flyer had flown off of the ground under its own power, which was a hopeful start. Both the brothers were positive that the machine would fly.
The repairs took a couple of days, and the flyer was ready again late December 16. Dawn of December 17 had a stout wind blowing in from the northeast and rain pounding down. The brothers had to wait till 10am, hoping the winds would die a little. When it didn’t, they chose to continue anyway. They sent signals to the rescue station to come help them carry their Flyer area top of the hill.
It was now Orville’s time to fly; he climbed up into the Flyer. It rose rapidly once they had estimated the power of the rise. For the first time, a motorized flying machine took off from the ground; it traveled under the control of its pilot.
Not pleased, the brothers wanted to again try. They had to repair the runners’ cracks, and at nearly 11:20, Wilbur then made the second flight travel nearly 175 feet.
With the assistance of the rescue crew, they then carried the Flyer to its original starting point and again tried. Orville made their third flight, twenty minutes later, and landed nearly 200 feet from its start point.
The fourth attempt began at almost noon; Wilbur was at the controls. The flight started like any other-with the Flyer pitching upwards and downwards. After about 300 feet, Wilbur regained control and began to travel on the same secure course. It proceeded in this manner until he had gotten about 800 feet. Then, the new Flyer began to buck and suddenly dove into the ground. The front was badly damaged, but the body was intact. He had traveled close to 852 feet in about 59 seconds.
After lunch, the two brothers contacted their father, “Successful four flights Thursday morning with average speed through the air of thirty one miles”.