Loncat ke konten
Beranda History The Ultimate Guide to Christopher Columbus
The Ultimate Guide to CHRISTOPHER COLUMBUS, the great navigator, is supposed to have been born at or near Genoa, in the year 1436, or as others say 1446. Though virtually the greatest man of his era, there is little definite information about his family and his early life. It would appear, however, that he was the son of a wool-comber; that he attended for some little time the then great school of learning in Pavia, where he evinced a taste for astronomy and cosmography; and that he early went to sea and made several voyages on the Mediterranean.
Settling in Lisbon in 1470, he there married the daughter of an Italian named Pelestrello, who had distinguished himself as a navigator in the Portuguese service, and with her obtained some valuable charts, journals, and memoranda. Lisbon, at this time, was the headquarters of all that was adventurous and speculative in geographical discovery; and here, while constructing maps and charts for the livelihood of his family, Columbus first appears to have imbibed the idea of land to the westward, which he was destined after long disheartening years to establish as fact – the land indeed not being as he had supposed it, a prolongation of the eastern shores of Asia, but a new western continent. 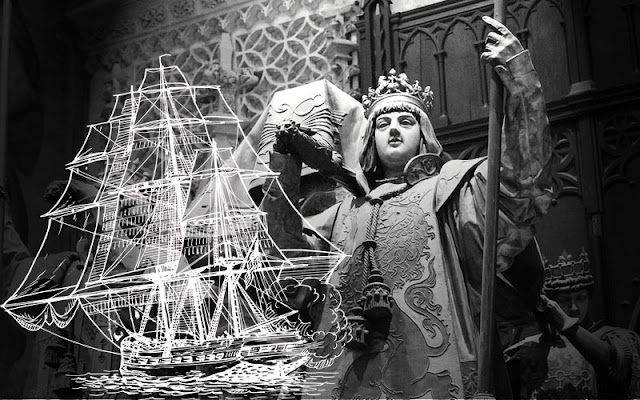 With the view apparently, of better qualifying himself for his great enterprise, Columbus made several voyages to the Azores, the Canaries, and the coast of Guinea – then the limit of European navigation in this direction. Not until 1482 or 1483, did Columbus find opportunity to lay his Scheme before John II of Portugal. This monarch referred it to a group of nautical and scientific men, who decided against it.
The King however, meanly taking advantage of a detailed plan obtained from Columbus, under false pretenses, secretly sent out a vessel to examine the route. Too timid to venture far from the beaten track, the pilots soon returned to Lisbon, to throw ridicule on the project. Disgusted with the duplicity of his sovereign, Columbus secretly left Lisbon in 1484 taking with him his little motherless boy, Diego.
He found his way to Genoa, where the republic, before whom he unfolded his scheme, treated it as the silly product of a visionary brain; and it is said that he met with like treatment from the Venetians; but it appears doubtful whether he at this time communicated with them. Disappointed but not despairing, for Columbus was buoyed up with the belief that heaven had commissioned him to plant the banner of the cross upon those shores, which as yet appeared to exist but in his own imagination, Columbus turned his face towards Spain.
Weary and hungry, he stopped one day at the Franciscan convent La Rabida, in Andalusia, to beg some bread and water for his child. This day was the turning point in his career. The superior of the convent, Juan Perez de Marchena, passing at the moment, entered into conversation with the traveler, and was so struck with the grandeur of his views, that he used all his influence to procure him the favorable consideration of the King and Queen.
It was not however, until seven more years of disappointments had passed over – during which Columbus had applied to other courts, and without avail – that he found himself in command of three vessels, only one of which was decked, with 120 men, ready to start on his adventurous enterprise. Columbus claimed as a reward, to be nominated high-admiral, and governor-general and viceroy, over all the lands he discovered, with a tenth of the produce of the countries. On the 3rd of August 1492, Columbus set sail from the bar of Saltes, near Palos.
Delaying a month at the Canaries to refit, he started thence, on the 6th of September, over unknown seas. His crew soon began to interpose their timid fears, and when these were unavailing, to express their open disaffection; but equally disregardful of both, Columbus bore steadily westward; himself, however, not without misgivings as to what the variations in the needle (not before discovered) portended.
On the 12th of October, his perseverance was rewarded with the sight of land, which proved to be one of the Caribbean islands. Here he solemnly planted the cross, giving the island the name of San Salvador. After discovering several other of the West India islands, including Cuba, Haiti, or Santo Domingo, at the latter of which, called by him Hispaniola, he settled a small colony, Columbus set sail again for Spain, where he arrived on the 15th of March 1493, where he was received with every demonstration of joy and admiration as well by the people as the court. In September of the same year, he set sail from Cadiz on a second expedition, with 17 ships and 1500 men.
In this voyage he discovered other islands, such as Jamaica, but calumnies at home compelled him to return, 1496. Having cleared himself with his sovereigns, he in 1498, set out on a third expedition. This time, steering more to the southward, he discovered Trinidad, and the mouths of the Orinoco, and landed at Paria, on the coast of South America.
After these discoveries, Columbus steered for Hispaniola, where he found everything in disorder. The King’s ear had been again abused; an officer named Bovadilla had been appointed to supersede Columbus as governor, and by this person Columbus was sent home in chains. This unworthy treatment excited the Spanish people to such a degree, that Ferdinand was fain to disavow all knowledge of the disgraceful affair. But all Columbus” efforts to obtain redress from the King were fruitless.
The spirit of adventure however, which had borne him up amid so many disappointments, was not to be crushed by injustice. It still burned bright and strong as ever within the great old man, who on the 9th of May, 1502, with four vessels and 150 men, set out once more to seek a passage uniting the Atlantic and Pacific oceans, which he imagined lay somewhere between Honduras and Paria.
But the mutinous character of his crew forced him to seek for gold, and after many difficulties and disasters, and having added little of importance to his previous discoveries, he returned to Spain in November 1504. Isabella dead, Ferdinand proved basely ungrateful; and so the noblest navigator the world has seen was permitted to die in poverty at Valladolid, on the 20th of May 1506. To make up somewhat for his injustice, Ferdinand gave Columbus a pompous funeral, and erected a magnificent monument to his memory, as if “Honor’s voice” could “Provoke the silent dust, Or flattery soothe the dull cold ear of death.”
Biography furnishes no parallel to the life of Columbus; great men there have been who have met with disappointments and injustice, but there is perhaps no other instance of a great man whom disappointments did not dishearten and disgust; who had his greatness recognized in his lifetime, and yet was robbed of the emoluments it entitled him to; and who after death had the honor he had so hardly won, conferred upon another.