Loncat ke konten
Beranda History The Historical Record of Warrington From 1847
In 1847 Warrington received its Charter of Incorporation as a Borough from the then Queen Victoria. William Beamont was appointed the Mayor and nine Aldemen and twenty seven Councillors elected. A building on the west side of the market place laid home to the offices and Council rooms. This was the Town Hall for about 25 years.
In 1870, Colonel John Wilson Pattern decided he wanted to dispose of his great home. The expansion of the manufacturing industry had encroached on his privacy. The once open planned area surrounding, his home, was now being built on as the town grew.
The Council decided to purchase the house for Ł9,000. An extra Ł13,000 was paid for the 13 acres of land which surrounded the house.Thanks to the generosity of Colonel Wilson Pattern, the Warrington taxpayer obtained their Town Hall for an initial fee of Ł9,500.Some of the land was immediately released and more was opened to the public in 1873. This was Warringtons first public park.The First Owner of the House 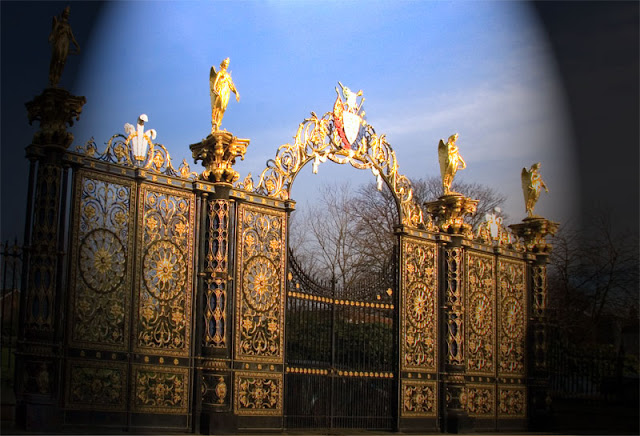 The Father of the builder of the house, also a Thomas Pattern, realised the importance of the River Mersey. He used it to bring copper directly to his smelting works. By the mid 18th Century, these local merchants became more important and landed gentry. They decided to move from their original house in Pattern Lane (behind Bridge Street) and have a new elegant house built. They commissioned Mr James Gibbs to build it. It is one of the finest Georgian houses in the North West and dates from 1750. As can be seen by the plaque on the drain pipes.
The Town Hall (Bank Hall)
The house contains nine bays from the front (south side), 3 either side of the center piece. The outer 6 bays are exposed brick. The arms of the Pattern family lie on top of 4 great columns.The back (north side) is much simpler, simply of bare brick.
The entrance hall is large and has distinctive features. Noticeable the large mosaic floor, built by Italian craftsmen. This was laid in 1890 replacing the original wooden floor. The whole house is decorated in beautiful stucco plasterwork. Each room is ornate with its own character.
There are many indications of what trade the owner was in. The foundations are made of blocks of copper slag. They can be seen in the cellars of the building.The window frames are not of wood as would be expected, but made of a combination of copper and iron.