Loncat ke konten
Beranda Olah Raga The Historical Record of Clyde Lovellette
With the retirement of George Mikan from pro-basketball, Clyde Lovelette has a big pair of shoes to try and fill. The 6ft. 9in., 245lb. Indianian will get some help from the five rookies who joined the team this season.
Replacing a legend is never easy, let alone a generational, epochal player like George Mikan. And yet, Clyde Lovellette was charged with that momentous duty. Sky-high expectations from onlookers were complicated by the fact that Lovellettes rookie season didnt come after Mikan retired, it came during Mikans, supposedly, final season.
Big George wasnt exactly thrilled with a talented young center chomping for playing time, but Lovellette proved instrumental in Minneapolis capturing its sixth and final title. His regular season average of 8 points and 5.5 rebounds bumped up to 10 points and 10 rebounds a night in the playoffs. In Game 1 of the NBA Finals, Clyde scored a team-high 16 points off the bench after Mikan got into foul trouble. The Lakers prevailed 79-68 over the Syracuse Nationals. The series dragged on for six more games with the Lakers finally ousting the Nats in Game 7.
Mikan retired and Lovellette became the offensive focus of the Lakers. He scored 19 points and hauled in 11.5 rebounds for the 1954-55 season. However, Mikan made an ill-fated return during the 1955-56 season and relegated Lovellette to the bench once again for half of that season. Clyde would nonetheless give the Lakers the lions share of minutes at center, despite not starting, and delivered his best year yet with 21.5 points and a career-high 14 rebounds a game. The strain of playing in Minnesota continued though. The unfair comparisons to Mikan, the embarrassing and awkward Mikan comeback, and the Lakers aging roster conspired to land Lovellette in Cincinnati for the 1957-58 season.
Lovellettes tenure with the Royals could have been a great redemption story. He formed a powerful frontcourt trio with Maurice Stokes and Jack Twyman that could, hopefully, one day rival the glory of the Mikan, Vern Mikkelsen, and Jim Pollard trio that propelled Minneapolis to title after title. It was not to be, though. In the playoffs Stokes suffered his debilitating paralysis and new ownership took over the Royals blowing up the roster that offseason. After just one year, Lovellette was on the move yet again.
Landing with the St. Louis Hawks for the 1958-59 season, Lovellette was again put to the bench. Older and wiser, Lovellette found the Hawks to his liking despite the benching. Old Lakers teammate Slater Martin was running point guard for the Hawks and their starting frontcourt of Bob Pettit, Cliff Hagan, and Chuck Share was working just fine. Clyde, who was never a good or even average defender, would be brought in off the bench to produce a burst of points to knock out the opponent.
After acclimating himself to the Hawks for a season, Lovellette exploded from 1960 to 1962 in a fit of offensive fury. He would average 21 points a night in just 30 minutes of action. His hook shot was devastating and hed produce some bone-shaking picks to free up Hagan and Pettit. On the boards he grabbed 10 rebounds nightly and his elbows warded off opponents left and right. The Hawks during these years made the NBA Finals twice but would lose to the Boston Celtics each time.
In an odd twist, Lovellette wound up finishing his career with those Celtics in 1963 and 1964. His offensive acumen had given way to age and an ever-expanding waistline. Lovellette had been generously listed at 235 pounds, but one look at his jersey told a different story. In any event, the old and cagey Clyde delivered enough elbows and boards to pitch in to Bostons two titles during those two seasons.

The four-time all-star retired after the 1964 season.

During his career he endured undue comparisons and faced scrapheap treatment, but persevered. He was the first man to average over 20 points in less than 30 minutes a game for a whole season. Along with Ricky Pierce, hes the only man to do that twice in a career. 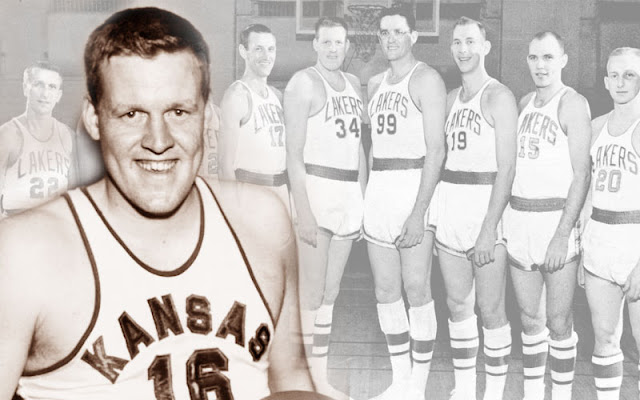