Loncat ke konten
Beranda History The Destruction of the Library of Alexandria
No one really knowsit really just depends on who you want to blame. The Great Library of Alexandria was one of the worlds earliest and greatest knowledge centers. Established around 300 BC, it became one of the first libraries, drawing scholars from across the Mediterranean in to study and submit works. Unfortunately, the Great Library is no more, having been destroyed at some point over the past two thousand years.
Interestingly, not one but many culprits are believed to be responsible for causing the librarys demise. Here are some of the leading theories on how parts of the library and its collection of scrolls, maps and books were destroyed:One of the first major fires to befall the library occurred in 47 BC. Julius Caesar led his Roman army to conquer Egypt. At one point he found his men surrounded in Alexandria. 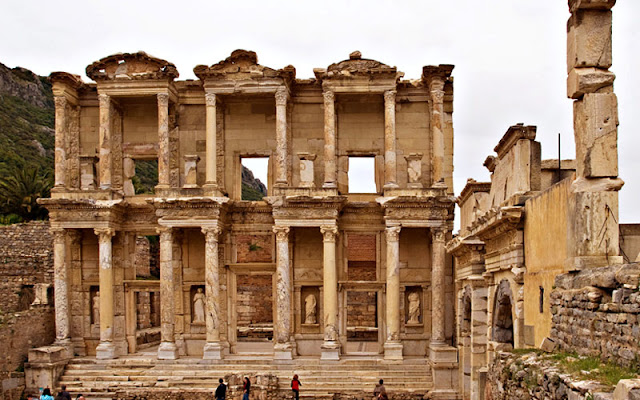 To prevent the Egyptians from blockading the port and severing him from his supply-line, he had his men set fire to the Egyptian ships in the harbor. The resultant fire was a major victory for Caesar but destroyed much of the city and its Library in the process. Caesars eventual victory in Egypt meant even more bad news: he had the Library ransacked and shipped much of its contents back to Rome.
Factoid Alert: Alexandria was founded in 332 BC by Alexander the Great to act as a port connecting Egypt to Greece. Alexander named several cities after himself during his conquests, but Alexandria, Egypt was the first and remains the most prosperous. Alexander was also entombed in the city after his untimely death.History notes that the Library was rebuilt and restocked. Some note another Roman invasion resulted in a fire in 273 AD that burnt much of the Great Library.
But the next major calamity came in 391 AD as Christians began to gain dominance in the city. Some argue that Theophilus, Patriarch of Alexandria, urged rioting and destruction in response to the death of a Christian monk. The resultant mayhem yet again led to fire consuming the Great Library and its contents: not only was it partly just at the wrong place at the wrong time, but Christians generally viewed the place with a good deal of animosity, seeing it as a refuge for pagans and Jews.
Some argue this was the final death blow for the Great Library.One final story suggests a fire in 645 AD after yet one more rebuild/restock. In this instance, the conquering Muslim caliph Omar is rumored to have ordered destruction of the Library and its books. Hes even said to have used the logic that if any books agree with the Koran, theyre not necessary; it any disagree, theyre blasphemous; either way they should be destroyed.
The validity of this story is murky  it was only recounted in written records centuries after it supposedly happened  but it does seem reasonable that upon Alexandria falling under Islamic control that at least any books based on Christian or other non-Muslim beliefs would be destroyed.Many submit that the Library not only suffered from manmade destruction, but also from the most notorious killer of paper: time.
Anyone who has visited the National Archives in Washington, DC will tell you the documents framing the American government are kept safe and sound in temperature- and pressure-controlled containers. Such technology only came about recently. Most likely many scrolls just disintegrated over time, and the Library would replace or recreate just the most important as reasonably possible.
As funds dried up for such efforts and scholars found other research centers across the West, Alexandrias Great Library drifted away along with its preeminence. But surely the manmade fires that destroyed the Library regularly did not help!
No matter who (or what) you blame for the destruction of the Great Library, it is a true shame. Thankfully in recent years, a new library in Alexandria has emerged. One of its stated goal is to act as a center for learning, tolerance, dialogue and understanding. Unfortunately throughout history, those traits have too often been in low abundance. The many atrocities befalling the Great Library is a testament to that sad fact.
Sources: eHistory Archive, StraightDope.com