Loncat ke konten
Beranda Biography Brief Biography of Mother Teresa
Brief Biography of Mother Teresa – Agnes Gonxha Bojaxhiu in what is known as the “Mother Teresa” was born in Bishop of Skopje, Ottoman Empire, Yugoslavia, on August 26, 1910. He was the youngest of the couple Nikola and Drane Bojaxhiu, minorities Albania.
When he was 7 years old, he had already lost a father figure, because the revolution has claimed the life of his father. The departure of his father is make it should be moved to Skopje. He then joined solidarity, a youth group of the Church.
In the age of 17 years, in 1928 he entered the convent of Loreto in Ireland and became a nun there. The story of his journey on the story of the life of the missionaries and their Ministry in Bengal.
He decided to become a nun when his conviction grew stronger acquired while praying at the shrine of the Black Madonna, Letnice in.
On November 28, 1928, he then joined the Institute of The Virgin Mary or known as the Sisters of Loretto, a community that is famous for his service in India. 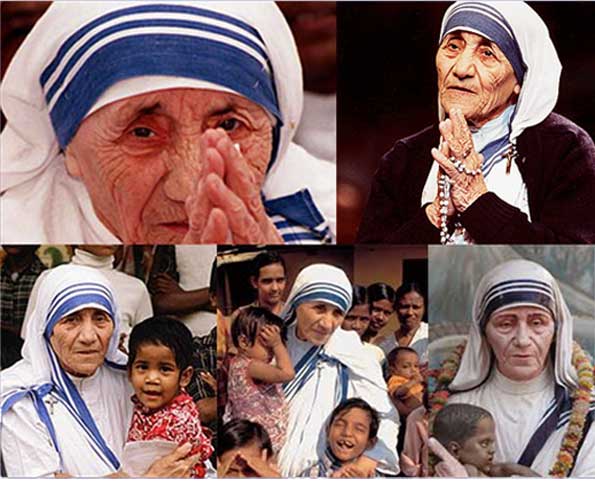 From this Assembly the name then changed to Teresa, taken from the name of a Saint in Catholicism, Saint Teresa of Lisieux. Finally, in 1929, he was sent to Bengal and trained in Dublin, as well as in Darjeeling to undergo education as a nun.
In 1931, Teresa taught at a school especially girls, St. Mary’s High School in Calcutta, India. Most students in this school are girls Bengali Hindus. The school is based in Ireland and run by Kesusteran Loretto. At school, he briefly served as head of the school, in 1944.
Teresa so enjoyed his activity as a teacher. However, plans to teach at St. Mary the disturbed when he saw the conditions surrounding it in a State of poor and displaced. The famine that struck Bengal in 1942 has brought misery and death to the townsfolk as well as violence against Hindus. This made the city increasingly gripping the Bengal.
In 1946 was an inspiring moment for Teresa. He was with the naked eye see the poverty and suffering of Calcutta society. His heart was touched and feel any sympathy view miseries people of Calcutta. He then took up an option that will change the destiny of his life’s journey.
Teresa seems remote, who did not want just to pray, go to school, and live in the order of running life. He didn’t want to live, while others around it were hungry, sick, and dying without anyone take care of it.
He intends to live with those who suffer. Eventually, he wrote a letter to Rome. And Paul is Pius XII ever granted his request and as nuns of “free” and not tied to a particular order.
Furthermore driven by his conscience, Teresa eventually resigned from the Sisters of Loretto and started entry to small villages and slums in Calcutta, India.