Loncat ke konten
Beranda Biography Biography of Mikhail s. Gorbachev was the son of a farmer
Gorbachev, Mikhail Sergeevich complete named Gorbachev, who was born on March 2, 1931, in the village of Provolnoye, Krasnogvardeisky District, Stavropol Territory, in the southern Russia Republic. He came from a peasant family. Experience a small time about Nazi atrocities continue to haunt his mind.
Ambitious plans are still 10 years, Nazi Germany invaded the Soviet Union. Her experiences about Great Patriotic War very gripping him. In 1944, his father died in a reported incident of the battle in his village, but it turns out that his father survived despite suffering severe injuries.
Gorbachev’s early life was filled by the socio-political life of erratic due to the invasion of Germany. At age 13, he had to work his farm. Activities helping his father in farming that has been instilled on him how a good farm. So no wonder if he was awarded order of the Red Banner of Labor. He received the award at the age of 17 years and made him the youngest award recipient at that time. 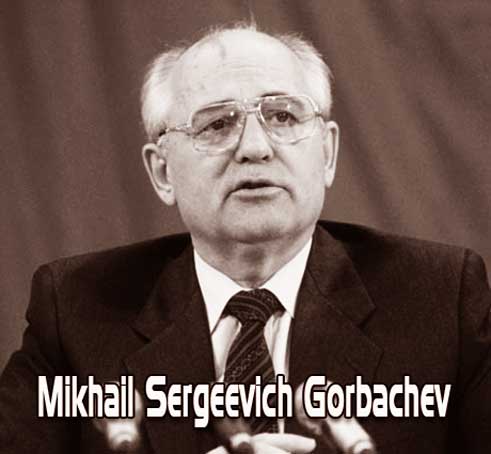 The persistence of the son of a farmer Mikhail s. Gorbachev
In the 1950s, Gorbachev graduated from high school. Later he continued his studies at the University of Moscow. While at the University he won a silver medal over academic achievement. He was educated in law and graduated in 1955.
After graduating from the University of Moscow, he took a course in agriculture at the Institute for agriculture and Agriculture holds a Stavropol in 1967. When he was a student, he actively involved in the Communist movement with its campus.
The liveliness of Gorbachev in the Communist Party in the Soviet Union led him to become an occupying important positions in the Communist Party’s Stavropol. He was given the responsibility to manage the areas of agriculture and industry, as well as being involved in the management of the administration. He was elected as Secretary of the Stavropol Kralkom in 1970.
Exactly four years later, in 1974, he was appointed Secretary of the Supreme Soviet. Then in 1979, he was appointed a member of the Politburo.
Thanks to the perseverance, loyalty and dedication, Gorbachev continued soaring up. He occupied the post of General Secretary of the Communist Party of the Soviet Union on March 11, 1985, replacing Chernenko was died.
Its strategic position in the Communist party he take advantage by recruiting younger generations that have progresivitas in the move. He made major changes to the structure of power. He was involved in the anti-corruption organization, organize, and discard those that are not considered kompenten. One step gemilangnya antialkohol is a movement to address the decline of the economy in the Soviet Union.
His post in the Communist Party, Gorbachev was making increasingly familiar with many world leaders from various countries. From this, the novel’s political movement and find enlightenment. He became the leader of a respected figure, respected, and admired thanks to thought and idea of cemerlangnya which later gave birth to the movement of the perestroika and glasnot.