Loncat ke konten
Beranda Country On The Continent Of Australia
On The Continent Of Australia – Things you need to know about the continent of Australia are as follows:
Location and area
Astronomical layout: between 10 degrees 30 ‘ LS-43 degrees 30 ‘ and between 113 era jar BT-153 degrees 30 ‘ E LONGITUDE.
The boundaries of the continent of Australia:
The total area of the continent of Australia is 7,682,300 square km, although not all regions could be uninhabitable desert areas are mainly inhabitants of the vast and barren.
Climate
Different types of climates in Australia due to the influence of factors of the latitude regions, ocean currents, distance from shore, a State of temperature and wind, as well as landscapes. Based on latitude. Australia has a different climate between the North and the South.
The northern part of tropical with an average temperature of 21 degrees C to 27 degrees C, while the southern climate is subtropical and temperate climate with temperatures around 5 degrees C in winter, with an average annual temperature varies between 16 degrees C and 21 degrees C.
In the area of the middle part of the air is drier and the form of the desert, as well as the annual precipitation, totals a bit. Most precipitation occurs in the East and North. Southern Victoria and Tasmania has a maritime climate with cool temperatures and rain in the winter.
In the upper reaches of the Murray River Valley and southwestern Australia there is a Mediterranean climate which is hot and dry in the summer, but fresh and wet in the winter. 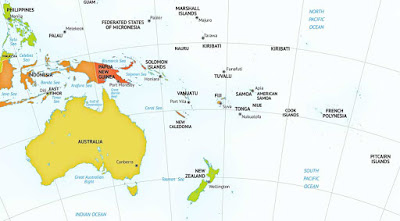 The landscapes
In general, the landscapes of Australia can be divided into three parts, namely the following:
1. Plato’s West
Plato’s in this area consists of desert, including a large desert in the North and the great Victoria Desert in the South. Some of the rocks that are in this field includes one of the oldest rocks in the world and contains valuable deposits of minerals such as iron ore, diamond, and nickel.
2. Inland lowlands
This area consists of The Great Artesian Basin; a Valley covered with sediment water the soil is very much stretching from the Gulf of Carpentaria in the North to Cape Spencer and Nelson Bay on the South coast of Australia. In this area, there is Lake Eyre which is the lowest point in Australia.
3. The eastern mountainous area (The Great Dividing Range)
Membuijur mountains along the East Coast is named after dividing range because the mountains form the watershed boundary (watershed) between watersheds flowing to the East by the river basin which flows to the West. Parallel to the northeastern coast of Australia, there are coral reefs in the Coral Sea (The Great Barrier Reef) that runs with the Queensland coastline.
State Population
Most of the population lives on the coast of Australia, and the East and South of its natural conditions are good enough. The Central and Western parts of the region are sparsely populated, except in some places, such as Perth, Kalgoorlie, Geraldton and Broome.
The main cause of the sparsely populated western and central region is a territory which consists of desert and dry steppe. The original inhabitants of Australia are Aboriginal people who are now the number is increasingly shrinking and many who live in the reservoir – a reservoir in the various regions of a barren and dry.
The majority of the population of Australia is the whites, especially immigrants the United Kingdom. The majority of the inhabitants are the Christian religion, in addition to Buddhism practiced by the Chinese people and the religion of Islam embraced by Arab tribes and other ethnic groups. The official language of Australia is the United Kingdom.
Form of Government
The form of the Government of Australia is the Constitution of the Kingdom of the Federation. Australia became independent on January 1, 1901. The head of the country, Queen Elizabeth II (Queen of United Kingdom), represented by a Governor-General and six State Governors. The chairman of the Prime Minister of his Government, the nation’s capital is Canberra.
The main economic activities
1. Agriculture
The primary results are wheat, many produced in the area of the Valley of the Murray, Darling, and the Swan River Valley.
2. Plantation
Export commodities from the farms are mainly fruits, grapes, apples, and pears. These fruits are produced in a variety of areas of Victoria and Tasmania.
3. The farm
The main livestock is a sheep that produces high-quality wool. Other livestock includes horses, cattle, and pigs.
4. Mining
The results of a major gold mine in Australia is mined in Kalgoorlie (Western Australia). The results of the other mines that have a high economic value are iron ore, zinc, petroleum, natural gas, and uranium.
5. Tourism
Natural attractions include the Marine Park (The Great Barrier Reef) and the Torres Strait. Many foreign tourists who come to tour cities, such as Sydney and Melbourne.
Australia is divided into six States and two territories, namely the following:
1. Western Australia (Western Australia)
Capital: Perth
Area: 2,525,500 SQ km
2. Northern Territory Australia (Northern Territory)
Capital City: Darwin
Area: 1,346,200 SQ km
3. The Queensland
Capital: Brisbane
Area: 1,727,200 SQ km
4. South Australia (South Australia)
Capital: Adelaide
Area: 984,000 SQ km
5. New South Wales
Capital: Sydney
Area: 801,600 SQ km
6. Australia Capital Territory (Australia Capital City Territory)
Capital city: Canberra
Area: 2,400 square km
7. Victoria
Capital: Melbourne
Area: 227,600 SQ km
8. Tasmania
Capital: Hobart
Area: 67,800 SQ km
Read also: Australia about the country
That’s all that was known of the continent of Australia, may add notes and insights of the world are worthy of note.
Post Views: 23