Loncat ke konten
Beranda History The development of Islam in Asia Afrika and Europe
History – Efforts to spread Islam were continued after Prophet Muhammad died, and it was done in line with the expansion of territory by the ruling caliphs.
The spread of Islam out of Arabia (Mecca) started when Abu Bakar became the first caliph of Arabia. Assisted by Commander Khalid bin Walid who was well-known as Allah’s Sword, Abu Bakar succeeded in taking control of Iraq, Syria, and Palestina.
These efforts were continued by his successor, Umar bin Khatab with troops riding on horses and camels under the command of Amr bin Ash. Amr bin Ash managed to take over Egypt and incoporate it into the territory under the control of Caliph Umar. The occupied territories were determined to be areas of Islam propagation.
When the period of Khulafaur Rasyidin’s reign ended, the Bani Umayyah emerged. During the rule of Bani Umayyah from 661-750 AD, Islam spread more widely. Bani Umayyah started when Umayyah bin Abu Sofyan held the caliphate position between 660 and 680 AD, and he moved the center of government from Kufa to Damascus because there were many people in Kufa who were loyal to the late Caliph Ali bin Abi Thalib. 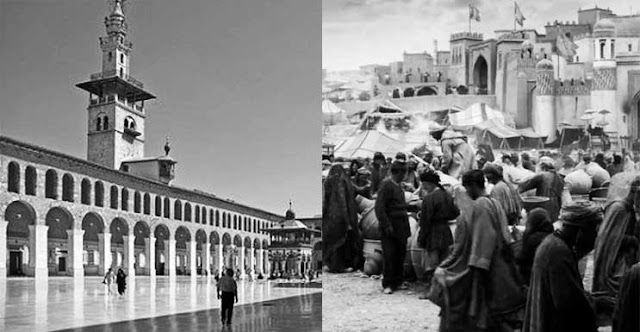 The reign of Bani Umayyah reached its peak during the rule of Walid bin Abdul Malik (705-715 AD). In that time, Islam spread as far as Hindustan, China, Spain, and South France in Europe. Walid bin Malik was well-known by his nickname, Commander of Tharik.
His name was perpetualized as the name of a place in continental Europe. Gibraltar or Jabal Tarik was the first area in Europe which was conquered by Commander of Tharik. When there was a dispute of power between the Bani Uamayyah and Bani Abbasiyah, one of the descendants of Bani Umayyah named Abdurrahman managed to escape and founded the Umayyah Dynasty in Spain with Cordoba as the capital town.
During the reign of Abdurrahmen, Umayyah Dynasty in Cordoba reached their golden period. Cordoba was developed into the center of Islamic civilization in Europe. They built a palace and mosques, hospitals, libraries and a center of scientific study. So Islamic culture of the Abbasiyah Dynasty in Baghdad.
The reign of the Bani abbasyiah (750-1258) was begun by Abu Abbas As-Saffah who ruled for 4 years. During the reign of this dynasty, the center of government was moved to Bagdad, and this town became the greatest town of science when Sultan Harun Al-Rasyid was in power. The reign of Bani Abbasiyah which was centered in Baghdad was the golden period of Islam in which Islamic teachings developed very fast.
Bani Abbasiyah collapsed in 1258 AD, after they were attacked by Mongols under the command of Hulagu.
The fall of Bani Abbasiyah did not mean the decline of Islam and its culture. In Egypt, the Fatimiyah Dynasty appeared and they made Cairo a center of Islam controlling North Africa, Egypt, Palestina, and Syria. In Turkey, there was also the Ottoman Turkish Dynasty that succeeded in building and imperium around the Mediterranean Sea.
In India, the Moghul imperium developed under Sultan Akbar (1556-1605) that expanded the territory of Islam as far as Bengal and Kashmir. The Islam imperiums made Islamic civilization developed even better and influence world civilization up to now.

Next article : The relation between Indonesia and centers of Islam development