Loncat ke konten
Beranda History The birth of Islam in Arabian Peninsula
History – Arabian Peninsula is located in Southwest Asia and surrounded by seas on three sides, namely the Iraqi Sea in the east, the Red Sea in the west, and Indian Ocean in the south, and it directly borders with Lebanon and Syria in the north.
Almost three-fourth of its land is constituted of deserts and barren, rocky hills. Researches show that Arabian Peninsula is one of the driest and hottest regions in the world.
Arabic people are included in the peoples who speak Semitic languages, and they used to be nomadic. The ancestor of Arabic people were Badawi people and they believed in natural power which influenced their life.
They called the natural power the genies who lived in the desert and had magnificent power. In addition, they also believed in the power of gods. According to their belief, the genies were usually evil while the gods were kind to humans.
Among the Arabic people before the arrival of Islam, there was the desert law which stipulated that power was in the hands of the stronger. They were often involved in intergroup battles to take control of springs (oases) as the source of life. 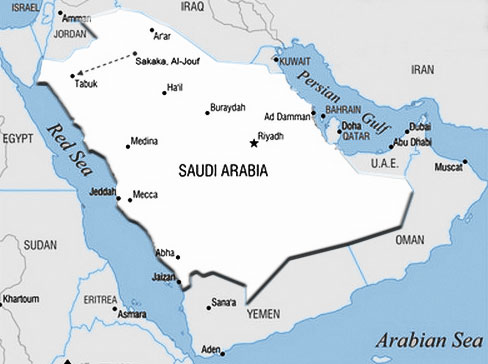 Because of the law, powerful warriors were born, while people who were physically weak were considered a burden. As a result, many baby girls were killed after they were born. The hard desert life, inter-ethnic conflicts, fondness of gambling, women harassment, and worship of idols were characteristics of the ‘jahiliyah’ (stupidity) era.
Amid such a condition, a baby boy was born in Mecca from a couple named Abdullah and Aminah on 12 Rabiul Awal, Elephant year,  or 20 April 571 AD. They baby was named Muhammad. It was called Elephant year because at the time there was an attack by troops riding on elephants under the command of Abrahah that tried to destroy the ka’bah (famous black stone of Mecca). The attack of Abrahah’s troops failed because the troops were destroyed by Allah SWT by means of a group of ‘ababil’ birds.
Muhammad had been an orphan sines he wa five years old. His father died seven months before he was born. Meanwhile, his mother passed away in Abwa on her way home from her visit to the grave of her husband in Madinah.
Since then, Muhammad was taken care of by his grand father, Abdul Muthalib, one of the leaders of Quraisy people. But two years later, Abdul Muthalib also died, so Muhammad was raised by his uncle, Abu Thalib.
As a future leader, Muhammad had shown an adorable behaviour and had been very trustable, so he was dubbed “Al Amin”. Muhammad worked as a shepherd, and he then married Siti Khadijah when he was 25 years old while Khadijah was already 40. They god several children from the marriage.
However, Muhammad was sad thinking about the condition of the Arabic ethnic groups who were divided and often involved in inter-ethnic conflicts, did idolatry. liked gambling, and degraded the women.
Nearing the age of 40, Muhammad often meditated in Hira cave which was located outside Mecca. On the eve of 17 Ramadhan or 6 August 610 AD, the angel Jibril came to pass on divine revelations from Allah.
After a dialog between the two, Muhammad was appointed Messenger of Allah (Rasulullah) and the process of the Quran revelation began. Muhammad was 40 years of age when he was appointed Rasulullah. After that, Prophet Muhammad started to propagate Islam among among his family members and close friends.
Efforts to propagate Islam was done seriously for 13 years in Mecca and 10 years in Madinah (Yatsrib). During the 13 years of Islam propagation in Mecca, Muhammad managed to get 100 disciples who were dispersed in Mecca and Madinah. Among his first disciples were Ali Bin Abi Thalib, Abu Bakar, and Siti Khadijah, his wife.
Because the reaction against the propagation of Islam got more severe and it even endangered his life, Muhammad finally decided to move the center of Islam propagation to Yatsrib. In this town, there had been some Muslims who were willing to help propagate Islam.
On 12 Rabi’ul Awal, 622 AD, the prophent and his followers moved to Yatsrib, which was then changed to Madinah or Madinatun-Nabi Which means the Prophet’s town.
While in Mecca, Muhammad only received revelations containing teachings on the oneness of God and instructions to human beings to perform religious services for God, but in Madinah Muhammad received verses which govern social laws, such as : rules on performing religious services, marriage law, hereditary law, and law of kinship.
Eventhough the followers of Islam had moved to Madinah, Quraisy people were still hostille to and even fought these first Muslims. Accordingly, a verse was sent down by God ordering Muhammad and his people to do Jihad.
Jihad means a struggle to defend the religion by physical, material, and/or spiritual sacrifice. It soon developed into a war to defend Islam from attacks by the Quraisy and other enemies. Severe battles broke out at Badr desert and Uhud which were won by the Muslims. Mecca was cornered and finally taken over by Muslim troops in 630 AD.
The Ka’bah was owned by Islam and most of the people of Mecca also converted to Islam. In line with the development of Islam, the people of Mecca who had been divided into many groups and lived in hostility to one another finally united and they acted as one nations outwardly.
After Prophet Muhammad propagated Islam for 23 years (22 years, 2 months, 22 days), the principles of life of the Muslims had been established, so the last verse was revealed and it says ‘Today I have perfected your grace and I have granted Islam to be your religion’.
After this last verse was revealed, on 12 Rabi’u Awal, 632 AD Prohpet Muhammad passed away in Madinah and was buried there.

Next article : The development of Islam in Asia Afrika and Europe