Loncat ke konten
Beranda History Expansion of Colonialism and imperialsm in Jayakarta
History-One of the offices of VOC was located in Jayakarta. Knowing that Jayakarta was very strategic, the governor of VOC, Jan Pieterzoen Coen, wanted to build a fort in Jayakarta and take a full control of the town. But it was certainly not permitted by Pangeran Jayakarta. At that time, Jayakarta was under the control of Banten.

Meanwhile, the commandant of VOC’s fort was captured by Pangeran Jayakarta. However, the attack of Jayakarta’s troops on VOC and its relationship with English people made Banten as the central government of Jayakarta anxious. 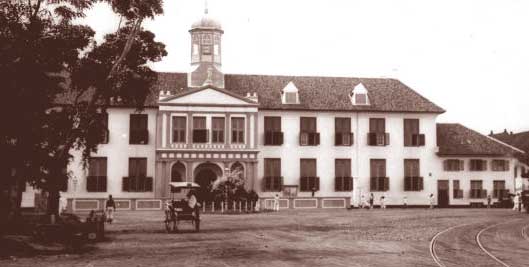 Banten was afraid that Jayakarta would rival her in trade and politics, and the building VOC’s office in Jayakarta had actually been approved of by Banten. To prevent the development of Jayakarta, Banten sent troops to take over the control of the area. The Dutch people who had been captured by Pangeran Jayakarta were taken to Banten.

On 30 May 1619, J.P. Coen came back from Maluku with more troops and they managed to destroy the palace of Jayakarta, then they sent out some messengers to Banten to ask them to release the Dutch prisoners soon or otherwise Banten would be attacked. After request was granted VOC left Banten, moved their trade office to Jayakarta and took full control of the town.

The takeover of Jayakarta by VOC in 1691 enraged Sultan Agung Hanyokro Kusumo of Mataram because he also wanted to control Jayakarta. For that purpose, Sultan Agung attacked Jayakarta twic, in 1628 and 1629, but the two attempts failed because Mataram’s troops were beaten by VOC.

Next article : Expansion of Colonialism and imperialsm in Banten