Loncat ke konten
Beranda History Expansion and diplomacy of Sriwijaya Kingdom
History – Sriwijaya was maritime kingdom which prioritized income from maritime trade. What made Sriwijaya a maritime kingdom was because the region of Palembang was not good for agriculture.
Trade would be less profitable to Sriwijaya if there were competitors which colud decrease the importance of Sriwijaya in trade. The competitors were Melayu (Malay) and Tarumanegara. So, in 688 Sriwijaya conguered Melayu and Tarumanegara.
Based on the information contained in some inscriptions, it was concluded that Sriwijaya had expanded its territory as far as Melayu near Jambi until Bangka island and South Lampung. Then it tried to conquer Java (Tarumanegara).
By taking control of Bangka, Sriwijaya also controlled Bangka Strait. When the trade of Tarumanegara had been paralized, Sunda Strait was put under its control. Therefore, the waters of west Indonesia was contolled by Sriwijaya. Yet it had not guaranteed the profit of trade for this kingdom.
Foreign ships which did not want to be distributed on their voyage preferred not to stop by at Sriwijaya harbours. They anchored on the west coast of Tanah Genting Kra, then had their cargo carried by caravans to Siam Bay through the highland.
This was certainly disedvantageous to Sriwijaya because it could not collect taxes from the ships anchoring at Tanah Genting Kra. To take over Kra, Sriwijaya then conquered Kedah.
By controlling Kedah that included Tanah Genting Kra, Sriwijaya forced foreign ships to sail through Malacca Strait and Bangka Strait that they controlled. Sriwijaya was able to get a lot of profits from the foreign ships.
It was known from I-tsing’s note that the foreign ships came to Kedah and Melayu on certain occasions. They stayed for some time while waiting for favourable wind, then they continued their voyage to their destinations. While staying in the harbours, the merchant ships could load and unload goods.
The control over Tanah Genting Kra enable Sriwijaya to control the navigation in Southeast Asia because Tanah Genting and Malacca Strait were the arteries of trade and navigation between India and countries in the east including China and Indonesia.
However, this condition made the interests of the neighbouring countries depend on the policy of Sriwijaya. This was a challenge to Sriwijaya to maintain her power because power produced reactions from the neighbouring countries whose interests were endangered by Sriwijaya.
In and attempt to maintain power, Sriwijaya developed diplomatic relations with countries which were considered dangerous to her power. The diplomartic relations were especially developed with India and China, two powerful countries that could endanger Sriwijaya’s position.
Balaputra establiehed friendly relationship with the king of Pala in the 9th century, then the relationship with China was strenghtened by sending some envoys to the country. The navigation in Malacca Strait became very busy, so Sriwijaya was well-known in other countries as twin countries : Sriwijaya – Kataha (Kedah). 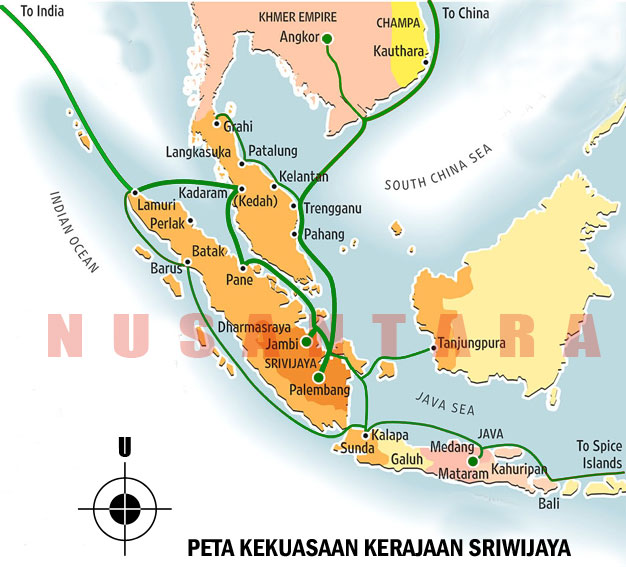