Loncat ke konten
Beranda History Development of Buddhism in Sriwijaya Kingdom
History – Buddhism had developed in Sriwijaya since the 7th century. In a fragment of Bukit Siguntang inscription, there is a word “Siksa Prajna” which is actually made up of two words ‘siksa’ and ‘prajna’ that relate to the basic principle of Mahayana Buddhism and Hinayana Buddhism.

The Buddhism prefessed in Sriwijaya was Hinayana Buddhism. Because of that, there are no remains of Sriwijaya in the form of temples and statues like in Java where Mahayana Buddhism was professed. Hinayana Buddhism did not use statues and temples in the ceremonies of worship, they stressed on meditation instead.

A Buddhist monk from China named I-tsing stayed in Sriwijaya for quite a long time and he translated several books of Buddhism from Sanskrit and Kwun-lun into Chinese. Kwun-lun was oled Malay language. It was stated that Kwun-Lun was used as the language of trade in Southeast.

King Balaputra built a dormitory in Nalanda for Buddhist monks from Sriwijaya. Facilities were given by the king of Pala. Devapaladeva for the construction of the dormitory in 860 AD. In his inscription, King Devalapdeva instructed five villages to supply the daily needs of the occupants of the doormitory built by King Balaputra. 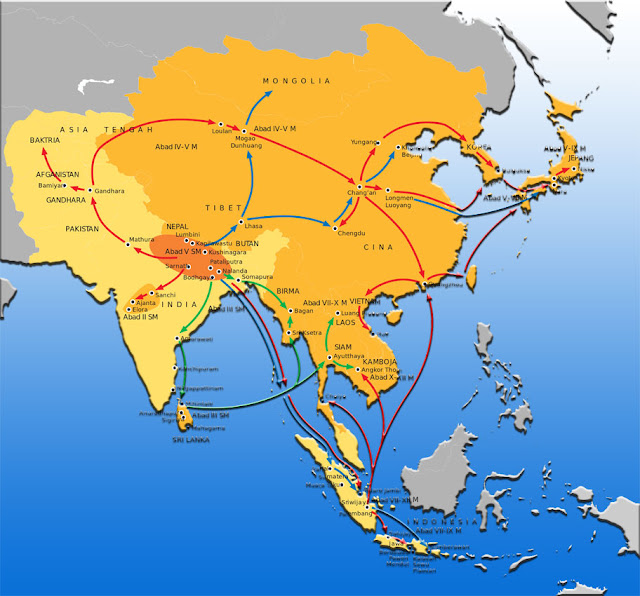 Next article : The decline and fall of Sriwijaya KingdomThanks for your visiting website history