History – In Indonesia, especially in Java, there are many Hindu-Buddhist historical inheritances in the form of temples (‘candi’ in Indonesia). The word ‘candi’ derived from one of the names of Durga (goddess of death), ‘Candika’.

A temple originally functioned to glorify someone who had died, especially kings and important fugures. When a king had died, a temple was then built to keep his charms. The charms were put in a stone case. Then the case was put at the bottom of the temple. Besides, a statue of the king was usually also created that picturized the king as a god.

According to its parts, a temple consists of three important structures, the foot, the body and the roof.
1. The foof of a temple is the bottom part which symbolizes the lower world or ‘bhurloka’. It is normally square in shape with stairs on one side.

2. The body of the temple is the middle sectionwhich is usually cubic in shape and symbolizes the intermediate world or ‘bhuwarloka’. The temple body consists of a chamber (room) in which there is a statue in the middle, some hollows on the exterior, and in this section there is also a wnding path called ‘pradhakshita’. 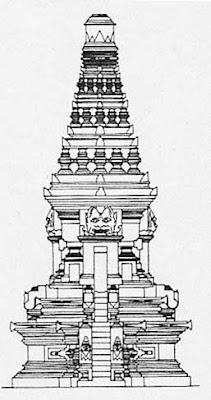 A stupa is a sacred building associated with Buddhism. Remains of stupas in Indonesia are not many, among others are stupas of Borobudur in Central Java, Sumberawan in East Java, and Muara Takus in Riau.

The Borobudur Stupas is not entirely stupa-shaped. A stupa is placed on top of the temple, but the largest part of the temples is the ‘prasada’ (foot of temple). Variations of stupas are found in some countries. There are three important sections of a stupa, they are as follows.

The statue heritages in Indonesia are commonly images of kings which picturize them as gods. Hindu-Buddhist statues have specific characteristics, so they can distinguish one god from another. The following are some of the important statues.

1. Shiva, it is characterized by the third eye on the forehead, it has four hands each of which holds an ‘aksamala’ (set of prayer beads), a ‘camara’ (fly expeller), a ‘kamandalu’ (jug of life water), and a ‘trisula’ (trident) with a snake ornament.

2. Brahma, it has four faces, four hands – the rear ones holding an ‘aksamala’ and a ‘camara’ – and it rides a goose.

3. Vishnu, this is characterized by four hands each holding a club, moving wheel, ‘syangka’ (shell with wings), and a lily bud or seed, it rides on a ‘garuda’ bird.

4. Buddha and Dhyani Buddha are characterized by a simple appearance with no ornaments, they only wear robes, have curly hair, with a kind of hair knot on top, and a kind of mole called ‘urna’ on the forehead.

5. Dhyani Boddhisatva, this is characterized by a regal or deity robe complete with a crown and accessories.

The relationship among Indonesia, India and China started with trade relation. Then, by means of trade relation, other forms of relationship also developed, such as social, cultural, and religious relations. It turned out that Indian influence developed faster in Indonesia and affected different aspects of people’s life.

Since the development of Hindu-Buddhist religion and culture in Indonesia, there had been some changes in the people’s life. Though the changes did not eliminate the original culture of Indonesia, they had created a distinctive pattern of the life of Indonesian people.

Acculturation of Indonesian culture with Hindu-Buddhist culture is evident in various aspects, such as architecture, literary works, scripts and languages, calendar system, system of government and system of belief.

Read also: The birth of Islam in Arabian Peninsula