Loncat ke konten
Beranda History Map of the route of entrance and spread of Hindu Buddhist religion and culture in Indonesia
History – The people of Nusantara had accepted new cultures from India. However, they did not abandon the culture and traditions they had for hundreds of years. They did not completely absorb the influences of Hindu-Buddhis cultures because. Nusantara people had local genius, that is the ability of a society to screen and process incoming foreign cultures to be adapted to the local cultures and traditions.
Here ate ten elements of foreign cultures adopted by Nusantara people, as indicated by Dr. J.L.A. Brandes.
Before Hunduism-Buddhism came to Nusantara, our ancestors had believed in the existence of supreme power outside themselves. The believed that when one died only his/her body was destroyed, but the spirit kept alive.
The spirit lived in a sacred place. Our ancestors then made contacts with such spirits, resulting in a custom to burn incense, have ritual meals and give offerings. Besides, they believed that there was supernatural power residing in certain things.
Then they made certain objects sacred, such as weapons, rings, bracelets, big trees and large stones. Such beliefes are known as animism and dynamism. Animism is belief in the spirits of ancestors, whereas dynamism is bilief in objects having supernatural power a magic power.
Buddhist culture and religion were estimated to have influenced Nusantara between tha 2nd and 5 th centuries whereas the effect of Hinduism started in the beginning of the 5th century. The following are scientists’ opinions about the people who brought Hinduism to Nusantara.

The Brahmana hypothesis says that it was the brahmanas who played the role in propagating Hinduism in Indonesia. The brahmanas were invited by rulers of Nusantara to crown kings, lead religions ceremonies, and teach science. The supporter of this hypothesis was J.C. Van Leur.

The vaisya hypothesis says taht it was the vaisyay (merchants) who played the role in spreading Hindu culture and religion in Nusantara. One of the supporters of this hypothesis was N.J. Krom.

The backflow theory says that it was the people in Nusantara themselves who spread Hindu religion and culture. They were those who had studied in India, and upon returning to Indonesia they propagated the culture and religion. The scientist who proposed this opinion was F.D.K. Bosch. 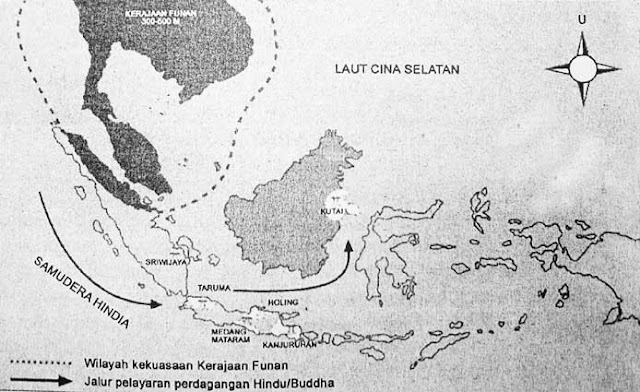 Hindu-Buddhist culture and religion were brought to Nusantara via sea and land routes.

They went with groups of merchants ship that often sailed to South Asia and East Asia. The route of the Hinduism-Budhism propagators was as follows:

Some of them even went to Nusantara directly when the westerly monsoon wind was blowing.

Some of the propagators of Hindu-Buddhist culture and religion by land route went along with the caravans by taking the silk road from India to Tibet and went to northward to China. The routewas as follows : India – Tibet – China – Korea – Japan.

Besides, some of them also took this reoute : North India – Bangladesh – Myanmar – Thailand – Malay Peninsula – Nusantara.

Next article : Regions which were influenced by Buddhist elements in Nusantara

May be “Map of the route of entrance and spread of Hindu Buddhist religion and culture in Indonesia” useful for history lovers.
Post Views: 11