This age happened about 2500 million years ago, at that time the earth crust was still hot, so there was no life. You may wonder when life on earth started. To know it, please read the next!

This period lasted 340 million years. The living things that appeared in this period wer microorganisme, fish, amphibians, reptiles, and invertebrata reptiles. Look at the illustration on the left for a clearer picture.
Though the primary age ended, life continued to the next age.

This period lasted about 140 million years. In this period, reptiles reached the largest size as seen in figure 1.6, do thid period is often called reptile age. After the secondary age ended, other forms of life appeared, birds and mammals of very low level. The reptiles were extinct.

This period is distinguished into 2 as follows:
a. Tertiary/the third age
This era lasted about 60 million years. The most important mark of this period was the development of mammals including primates, such as monkeys.
b. Quaternary/the fourth age
This period marked by the appearance of humanlife so this was the most important period. It is further divided intotwo ages, Pleistocene and Holocene.
Pleistocene/Diluvium period lasted around 600.000 years and was marked by the existence of ancient humans. Holocene/Alluvium period started about 20.000 years ago and is still going on up to now. This period was marked by the appearance of Homo Sapiens with characteristics of today’s human beings.
To know more about the geological periodization of pre-historic time, please study the diagram below : 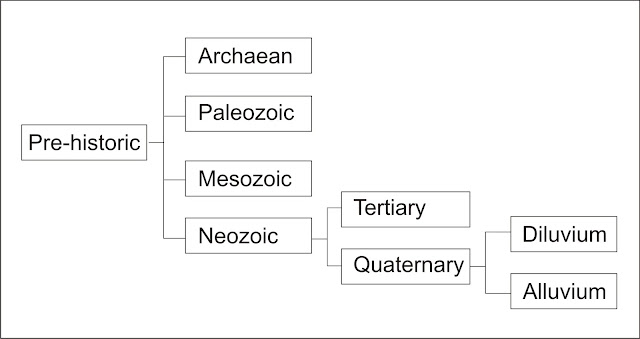 Next the read : Periodization of Pre history Time based on Peoples Life Characteristics
May be useful to readers of history.
Post Views: 9