Loncat ke konten
Beranda History Early development of Buddhism
History – Early development of Buddhism – Buddhism was first taught by Sidharta, a son of King Suddhodana of Kapilavasta kingdom who was a descendant of Sakya people. He was known as Buddha Gautama or Sakyamuni.
At first Buddhism was not a region, it was only a new sect in Hinduism which developed because of a feeling of dislike against the privileges of the Brahmanas. At that time, the Brahmanas had special rights to learn the Veda, master the content of Veda, conduct sacrifice offering ceremonies, and give guidance to reach moksha.
Teh privileges were considered to have made in difficult for common people to reach moksha. As aresult, a practical teaching that could be implemented easily by the people developed, it was Buddhism.
There are four places which are considered sacred by Buddhist people because they are associated with Sidharta. The places are Lumbini Park, Bodhgaya, Benares, and Kusinagara. Lumbini Park is located in Kapilavasta, the birth place of Sidharta (563 BC).
Bodhgaya is the place where Sidharta received the great enlightenment. Benares is the place where Sidharta propagated his teaching for the first time. Kusinaraga is the place where Sidharta died (482 BC).
The timeofhis bireth, his first enlightenment and hs birth was the same, that is during the full moon in May. The three events are celebrated by Buddhist people as Vesak. 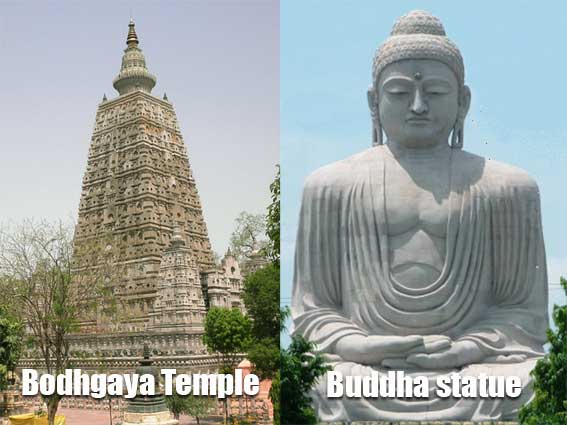 Life of Buddhistpeople
The buddhistsociety was formed after the Buddha taught his great experience to a number of people. His first sermon was given at the deer park of Isipathana in Sarnath, Benares. He got his first four followers in that place.
The preaching that was given by the Buddha and his students from place to place attracted many people. Some of his followers followed his life as monks and they were called Biksu (male monk) and Biksuni (female monk). They formed a community called Sangha. Besides, there were also followers who maintained their jobs and daily activities. They were called Ummah.
Buddhism does not recognize a caste system. The monks and ummah are both called children of Buddha’s. They support each other in implementing the teachings of Buddha which are called Dharma.
The ummah are responsible for meeting the physical needs of the monks such as food, clothing, and home. On the other hand, the monks are responsible for meeting the spiritual needs of the ummah by giving them guidance and examples of life that accord with the teaching of Buddha.
The monks have a special duty to keep the purity of Buddha teachings and teach them to all people. For that purpose, they live in poverty, meditate and keep learning. Some of theme live as monks until death and some become monks for a certain period only.
Essence of Buddhist teaching
Buddhist life is guided by the Tripitaka book. Tripitaka means “three baskets” because the teachings were written on palm leaves which were then kept in baskets. The book is written in Pali language, a daily language of the people. hat is why the book can be read by people of all levels.
The teachings of Buddha are summarized as Four Noble Truths and Noble Eightfold Path. The teachings are bsed on thexperience of Sidharta Gautama, starting from his sorrow in seeing the hardship o people outside the palce until his ourney to search for the meaning of life.
The Four Noble Truths (Catur Aryasatyani) in Buddhism are as follows :
1. In people’s life, suffering is greater than happiness.
2. Suffering exists because of the desire to live.
3. Suffering can only be eliminated by the efforts of humans themselves.
4. The way to stop suffering is by taking the Noble Eightfold Path (Astaida) that comprises right understanding, right thought, right speech, right action, right livelihood, right moral effort, right mindfulness, and right concentration.

Next article : Development of Hinduism Buddhism in Asia
May be “Early development of Buddhism” useful for history lovers.