Loncat ke konten
Beranda History The Baron's Revolt
After Richard I’s death in action, his brother John inherited the throne. During Richard’s reign, the barons had been heavily taxed to pay for the crusades. Those who hoped that John’s demands would be more moderate were disappointed. This time, the money was needed to pay for another war with France.
If John’s military expeditions had been successful, there might have been fewer complaints. They were not. As he bungled one campaign after another, the French won back all the royal possessions in France.
The Angevin Empire over which Henry II had ruled was now gone. The baron’s money was quite clearly being wasted. And John’s blunders continued. He quarrelled with the Pop. English church-goers were refused the right to take communion. The king was excommunicated.
Young Prince Arthur of Britanny – John’s nephew – had been recognized by Richard I as his heir. But Richard had been too busy to make the necessary arrangements. After the Lion Heart died, Arthur was mysteriously murdered. The barons believed that John was responsible.
The new king’s unpopularity increased. According to custom, he should have ruled with the co-operation of the barons. He ignored their advice, failed to give them the rewards they expected, threated them unjustly in the law courts, and generally scorned them. On trips to Ireland, he teased the noblemen about their old fashioned habits. In a more jovial mood, he used to pull their beards. John no doubt found it amusing. The Irish barons did not.
Nobody trusted John; nobody liked him Eventually, the barons decided that he had gone too far. Either he must accept their demands for better treatment, or else they would rise in revolt. 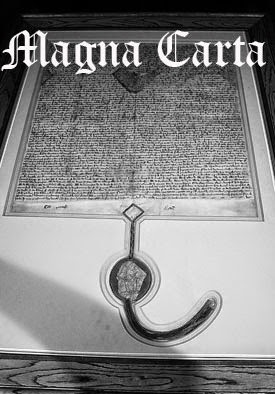 On 15 June, 1215, King John and the barons met at Runnymede on the Thames near Windsor. After angry exchanges, the monarch was persuaded to put his seal on a document known as the Great Charter (or Magna Carta). All told, it contained sixty-three clauses. They affected all manner of things from standards of measurements to fish traps on the Thames.

But the one that gave Magna Carta its reputation was number 39. It stated that no freeman might be improsoned, outlawed, exiled or in any way destroyed … excpect by the lawful judgement of his peers or by the law of the land.

It also insisted that nobody should be excpected to pay a fine so large taht it deprived him of his livelihood; that the barons had a right to be tried by their equals; and that the King himself came under the law.
But these legal safeguards did not apply only to the nobility. As the barons were quick to point out, all free men should enjoy them. They would grant them to their own men.
Reluctantly, King John agreed, Afterwards, he protested that he had done so under force. Consequently, he could not be expected to honour his pledge. It is possible to see his point of view. The barons had taken a tough line and, so far as the king was concerned, the terms were extremely harsh.
The result was civil war, John’s men marched against the barons. But he did not live to see much of the fighting. In 1216, he died at Newark – probably as the result of eating too many peaches and drinking too much sweet ale.
As for the barons – they won in the end. In 1217, one year after John’s death, his successor, Henry III, confirmed the terms of the Magna Carta. Justice, roughly along the lines we experience today, had at last been estabilished in England.
Henry II no doubt knew what he was doing when he agreed to Magna Carta. But the document must have been confusing, for he was only ten years old. His guardian and regent, William Mashall. probably explained it carefully to him – and almost certainly encouraged him. William Marshall had, as it happened, been one of the advisers to the charter’s authors.
When the new king grew up, he added to the treasures of British architecture by rebuilding Westminster Abbey. Unfortunately, he did not do very much else. He certainly failed to provide the faith in royal authority that the country so badly needed. That had to wait until 1272, when Edward I came to the throne.

Next article : Trouble on the Frontiers