Loncat ke konten
Beranda History Hundred Years War between England and France
Hundred Years War between England and France. In 1338, the English and French started a war that went on until 1453. It was called the Hundred Years War. In fact it wasn’t really a hundred year war. It rumbled on spasmodically for longer than this, but the ‘Hundred-and-fifteen Year War’ might not sound so impressive. The original cause of it was that Edward III (1327-1377) felt that he should be King of France.
The fact that the war went on for over a century should not suggest that the fighting was continuous. It was, rather, a number of isolated campaigns; and subject to many interruptions. For example, the Bl*ck De*th occurred early on, and this put a stop to operations for at least two years.
Richard II took very little interest in it; and even Edward III, who started it all, had to negotiate a truce at one point – simply because he had run out of money.
Edward III’s Campaigns
The first battle took place in 1340 and it was the first naval battle for a great many years. One hundred and sixty-five French ships were anchored off the Flemish harbour at sluys. They were lasehd together in four lines to prevent an attack. 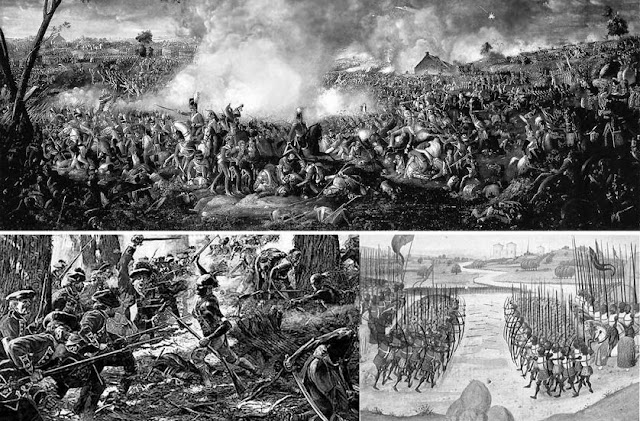 The English flect of 250 vessels – led personally by Edward III – manoeuvred to windward with the sun behind them. Wooden eastles had been built at the fore and after parts of each ship, and these were crowded with archers.
After the first volleys had been discharged, the attack developed into a desperate hand-to-hand strugle. The French fleet was almost completely destroyed with enormous casualties. One of the rewards of victory was that, without a navy, the French were no longer able to carry out raids on the English coast.
After Sluys, Edward was in financial difficulties, and iot was not until 1346 that he could afford to go campaigning once more. He leanded on the French coast with a force of 10,000 English archers, 3,000 knights, 4,000 Welsh light infantry, 3,000 light cavalry, and a number of cannons. The idea was to drive inland to Paris, but he was halted on the River Somme.
On the afternoon of 26 August, 1346, his army formed up on a hillside near Crecy. It had been raining all day; but, at six o’clock, the sin came out. From his command post in a windmill, Edward waited for the French attack.
He suspected that his men were outnumbered by three to one; and he must have been concerned for the 17-year-old Prince of Wales (the Black Prince), who was well to the fore. But when somebody suggested that his son should be withdrawn to safety he shook his head. ‘Let the boy win his spurs’, he said. The boy won them.
The French were in too much of a hurry. Galloping uphill with the sun in their eyes, the cavarly collided with their own archers. When, at a range of 150 metres, mercenaries from Genoa let fly with their cross-bows, most, most of the bolts fell short. The English archers, with their six-foot longbows, bided their time. Then, when the range was right, they fired in perfect unison. Within seconds, there were fearful casualties in the French ranks.
For the English, the worst was over. Nevertheless, the French made fourteen more attempts to break through. All of them failed. Crecy cost them something like 20,000 casualties. The English losses were about 200.
From Crecy, Edward turned his attention to Calais. The town was besieged for a year. Eventually starvation caused the inhabitants to surrender. Edward insisted that the keys be brought to him by the six leading citizens – wearing nooses round their necks, ready to be hanged. But the French queen pleaded for their lives, and Edward relented.
After the Black Death, the war was resumed, with the Black Prince campaigning in France. In 1356, he fell in to a trap at Politiers; offered to surrender and was refused. It was, perhaps, as well. In the battle that followed, the French were routed, and their king taken prisoner.