Loncat ke konten
Beranda History Henry V's Campaigns taking people's hearts English
Henry V’s Campaigns taking people’s hearts English. Two generations of sovereigns lay between Edward III and Henry V, the next English monarch ti apply himself puposefully to the war. In the late summer of 1415, he captured Harfleur after a siege lasting two months. But disease and enemy action had robbed him of 3,000 men. Worried about the state of his army, he decided to make for Calais, marching at the rate of fourteen miles a day.
Outside the castle at Agincourt, he came across a French force that (as at Crecy) outnumbered the English by three to one. It had been raining. Henry’s troops looked like a collection of scarecrows. They were tired, hungry, sick, clad in rags, and many of them were barefooted. But they had the caurage of desperate men, especially when Henry told them the enemy had threatened to cut off two fingers from the right hand of every archer captured.
The French had to advence across a newly ploughed field, and they seemed reluctant to bagin. Henry knew that his forlorn army could not exist in the field for another day without the spoils of a victory. The battle had to take place. 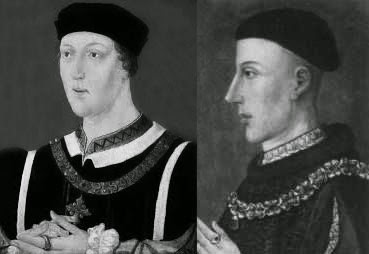 After waiting anxiously for three hours, he told his archers to move forward. When they were within 300 meters of the French troops, they let loose a volley of arrows.
Immediately, the French were stung into action. But as their knights rode towards the English, their horses were shot from under them. They fell, helplessy, into the mud. Burdened by very heavy armour, most of them were unable to get up again. The English might be less well protected, but at least they could move freely.
By midday, the French attack seemed to have spent itself. But now there were repots of trouble in the English camp at the rear. Henry ordered all the prisoners to be killed. He had, he protested, not enough men to guard them.
The king himself led the final charge of the day, which completely dispersed the French forces. When the fighting stopped, the French had lost about 10,000 dead and 30,000 wounded. The English casualties totalled no more tahan 300.
From Angincourt, Henry pressed on to Paris, where he married the King of Frane’s daughter, on the understanding that he should inherit the French throne. But the French King outlived him. In 1422, Henry V died – and so did England’s successes in France.
The French army was given new heart by a 19-year-old girl named Joan of Arc. Bit by bit, the English were shaken loose from their conquests until only Calais remained. As for the English archers, their usefulness ended at the battle of Formigny in 1450, when the French cannon carried out dreadful punishment. Three years later, the war ended. Read previous article: Hundred Years War between England and France, or next article: Shining Armour Throughout the Muddle Ages
Post Views: 13