Loncat ke konten
Beranda History Black Death and the Peasants' Revolt
History of England timeline. One day 1348, a man at Melcombe Regis (now Weymouth) in Dorset aomplained of a throat. Soon he was running a high temperature; there were swellings in his armpits and on his groin, and hard black spots appeared on his face and body. The doctor looked on helplessly, and the man died. Bubonic plague, known as the Black Death, had arrived in Enggland.
The disease, which began in the East, was transmitted by fleas travelling on rats. In came to Europe on board an Italian merchant ship, and, by 1340, it had reached the farthermost parts of Scotland.
Once it was established, another illness, pneumonic plague, developed. This was passed on much like a present day ‘flu (hence the grim nursey rhyme: ‘Ring a ring of roses /A peocket full of posies/ Atish-oo, atish-oo, we all fall down’. It refered to pneumonic plague and the sneezes that were the first symptoms). 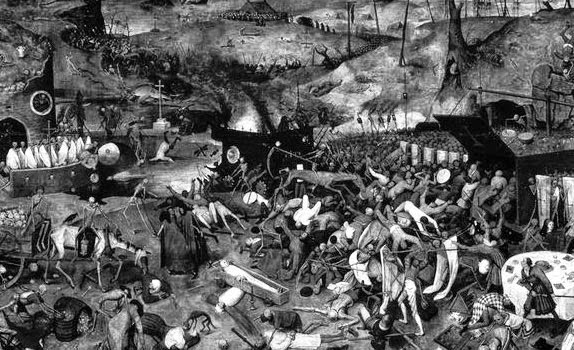 Rich people, in panic, fled from the towns – hoping for survidal in the country. Some were lucky; others took the germs with them. Families, entire villages perished. And the doctors were powerless. They played with chemicals; they thought they knew much about astrology. But, for the Black Death, they had no medicine.
The epidemic lasted for two years. By the end, about one-third (it may have been half) of Britain’s population had died. In Europe, 25 million perished. There were no longer enough peasants to work the land.
Until now, it had been almost impossible for a serf to move from his patch of earth; to go from a bad master to one who might be better. Now he had freedom to improve his fortunes. What was more, the promise of food and a roof were no longer enough to pay for his services. He wanted wages.
Many, though not all, began to recieve payment for their work. Unfortunately, prices started to rise at the same time. Before long, the majority were no better off than they had been before the Black Death. Egged on by an ex-priest named John Ball, they became anggry – especially when, in a attempt to stop prices rising, their wages were frozen.
The last straw was the so-called Poll Taxlevied in 1379 to pay for the 14-year old King Richard II’s useless wars with France. Every adult, no matter how much money he had, was forced to pay up. But the French continued to make a nuisance of themselves by raiding the English coast. Teh money, obviously, was being wasted.
In fact, there were a series of Poll Taxes. The first, in 1377, imposed a levy of 2p on everyone over the age of fifteen. Later, in 1380, it was raised to 5p a head. Commissioners travelled the country, collecting the money. In many cases, payment was long overdue.
In 1381, their activities gave rise to a rumour that yet another Poll Tax was about to be levied. This was too much. The peasants rebelled. Appropriately perhaps, their first victim was one of the commissioners.
Teh rebels were massed in two forces, one under the leadership of Jack Straw, marched on London from Brentwood in Essex. Another, under Wat Tyler, converged on the capital from Kent. On the way, Tyler’s men stopped at Maidstone to liberate John Ball, who had been shut up in the local jail.
Tyler’s men might have been halted at London Bridge, but rebels inside the city had lowered the drawbridge in the middle. They marched across; on the far side, they went on a rampage of murder and burning. The Archbishop of Canterbury and the Lord Treasurer had taken refuge in the Tower. The mob broke in and lynched them both. John of Gaunt’s Savoy Palace was sent up in flames. Tyler did, however, manage to disuade his men from looting.
But now the young king was riding out. In Smithfield, he met the rebels. ‘Tell me’, he said, ‘what you want’. Tyler began to bluster; the king remained calm. Then, suddenly, there was a scuffle. Tyler – perhaps caught up in an attack on the Lord Mayor of London – was stabbed. The mob became even angrier, but the king rode towards them. Speaking quietly, he told them to go home. He, personally would investigate their complaints.
Impressed; perhaps feeling a little bit foolish, and robbed of their leader, the crowd dispersed. The Peasants’ Revolt was over. The Poll Tax was dropped, but a promise by the king to abolish serfdom was quickly retrached. John Ball was hanged, drawn and quartered, which was certainly not part of the rebels’ plan.
It is sometimes argued that tahe politicians had triumphed over the boy king, causing him to break his word. If this was so, it cannot have been difficult. Richard’s final taunt to the peasants was, ‘Villeins (another word for ‘serfs’ – the drudges of the soil) you are, and villeins you will remain’. It did little to suggest concern for their welfare.

Read the previous article : Life in English castle, or the next article : Canterbury Cathedral Britain in history