Loncat ke konten
Beranda History The Anglo Saxon Invasions
History of Britain, The Anglo Saxon Invasions. The Roman Empire was in trouble. By the middle of the 4th century, Rome itself was under attack by barbarians from the north and east. The legions had to be withdrawn from Britain. With no soldiers to defend it, the island was now at the mercy of invaders.
In 446, a British chief wrote to the Emperor. It was a sad, desperate appeal – asking him to send back the legions. He received no reply.

The Romans had been prepared to teach the Britons so much. They had shown the way to civilization, but the Britons had refused to learn. The system of central gevernment collapsed; small local kingdoms, each with its own ruler, were estabilished. Had they been united, they might have driven off the barbarians from across the Channel. All too often, however, they were fighting among themselves.

A few cities, such as St Albans, maintained the Roman way of life. The majority – Bath, for example – became deserted. Their streets were empty; their buildings falling into ruins.
Ireland had not been invaded by the Romans. Her people were still living in the last of the Iron Ages. Using boats made from skins, Scots (which was probably the Irish word for raiders) crossed the sea, and helped themselves to portions of south-west Scotland. From elsewhere in Scotland, the Picts (who had overrun the Lowlands in 209) brought havoc to the north of England. In southern and eastern England, the trouble came from Europe.
About the year 449, a king named Vortigern whose realm strechted from Wales to Kent became anxious. In the north, there was anarchy. It could not be long until it spread to the south-east. In a attempt to make himself more secure, he offered land on the Isle of Thanet in Kent to a pair of Jutish chiefs (from north-west Germany) named Hengist and Horsa. They accepted.
Poor Vortigern; his plans went wrong. Hengist and Horse quickly realized that this was a land of opportunity. The Britons seemed to be a cowardly people, unable to defend the little that was theirs. Land and pluder were to be had by anyone who came and took them. They sent back messages to Europe and their fellow countrymen poured in.
Hengist slew Horsa and overwhelmed the whole of Kent. Vortigern was now even worse off; but that, as the Romans had discovered, was the snag about employing mercenary fighters. They usually ended up by taking the vey thing they had been hired to defend.
And the invaders continued to arrive. The pattern was nearly always the same. At first, there were small parties; then much larger numbers. The Angles (from the Elbe and Rhine districts) and the Saxons (from north west Germany) moved in. The former occupied Norfolk and Suffolk; the leatter – Essex, Middlesex, Sussex and eastern parts of Wessex.
The newcomers pushed on. Following the rivers, they made their way into a land of forests, rough moorland, and bogs. Occasionally, they came across the mouldering remains of a Roman city. They had never seen buildings on this scale, and they assumed they had been built by a race of giants. They didn’t care for them. instead of occupying them, they built their settlements beyond the defensive walls.
On and on they moved – through forests inhabited only by wolves and bears, clearing away the trees and making farms. They were tough, brutal men who knew no mercy. it is impossible not to admire their courage; but, for the Britons, their arrival was catastrophic. Those who remained behind became slaves. The majority sought sanctuary amid the hills of Wales or Scotland. Nowhere else was safe. 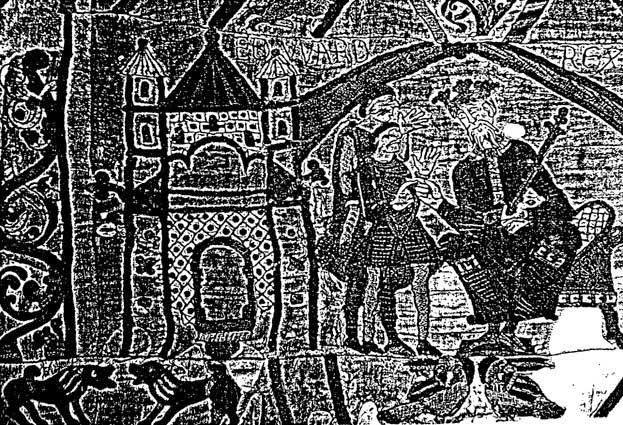 Read previous : Life in Roman Britain, or read the next article : King Arthur and Seven Kingdoms