Loncat ke konten
Beranda History Early village life history
History of Britain, Early village life history. Until the arrival of the Celts, there were no permanent homes. As the seasons changed, a man and his family moved on with their livestock in search of better grazing land. The valleys were thick with trees. Wolves, bears and lynxes still roamed in these dark places.
It was better to keep to the higher ground : to the moors and the download, where there was grass for the animals, and where a crop of barley could be grown from the thin soil. To still this soil, they used a kind of plough.
The earliest examples of this instruments were hand-held spikes that bit into the earth. A man would work over his land twice-on the second occasion, moving at right angles to the first. 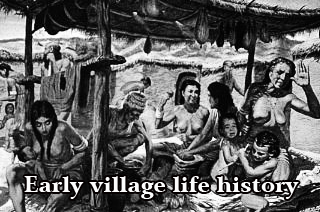 During the stone Age-from about 3000 BC man learned hiw to build a more permanent home. The roof was thatched; the floor was sunk beneath the ground. A fire provided warmth, but here was no chimney. The smoke escaped hrough the entrance, and gaps in the walls.
The appearances of these early houses varied from one part of Britain to another. In the North of Scotland, for example, there were plenty of stones, and these were used to build them. They were similar to larger constructios (some of them oves six metres high) known as ‘brochs’, which were used as shelters against sudden attack. Since there were fewer stones in Southern Scotland. the inhabitants made round huts from mud.
The early inhabitants of Ireland made them-selves huts that looked rather like giant bechives. The walls were made of stone; the roofs put together from reeds. During winter nights, families huddled over peat fires that smouldered in the centres of the earthen floors.
As time went by and the Celts arrived, the newcomers laid out large rectangular fields. They marked the boundaries either by ditches or else (as, for instance, in Cornwall) by drystone walls. They also improved the method of ploughing.
They produced wooden blades with iron tips, and used oxen to haul them. Having gome to so much trouble, they saw no point in moving on as the seasons changed. The farms and villages they built became permanent.
Gradually a system of tracks spread across the country. Each linked one community with another; they usually followed the edges of the high ground. Where they had to cross marshland, causeways of split logs and brushwood were built.
Many ot the settlers now lived in houses that had one circular wall within another. The family inhabited the smaller; the sheep and cattle were given shelter within the outer.
The men of the village looked after the animals and ploughed the fields. The women wove cloth from which they made garments; manufactured cooking pots from clay; and ground the corn.
Every village had a smith, who smelted the iron ore and wrought it into tools and weapons. Sometimes, a wandering trader called-offering beads from Egypt, amber from the Baltic, or golden ornaments from Ireland. From these visitors, the simple farming community received its only news of the great world beyond.
People died. From the middle of the Bronze Age, the dead were cremated. The ceremony normally took place on the edge of hill. After-wards, the burnt bones (still hot) were placed inside an urn, which was covered by a circular mound.

Read previous : The Early Settlers, or read the next article : A place of Worship Britain